Want to know which is better calcium in breast milk vs cow milk? The fact that you are asking this question demonstrates that you are an intelligent and enlightened individual. Let me answer that for you. There’s absolutely nothing different, except for one thing. Your full-term, freshly-born baby is getting exactly what it needs from you in order to grow into a healthy, happy baby.

WHAT IS IN BREAST MILK

Milk is a product of evolution designed specifically for the nutrition of infant mammals. It bridges the nutritional gap between intrauterine dependence and extrauterine independence. The same nutrients are present in the milk of all species, although in different proportions. Such quantitative differences appear to be an adaptation to the nutritive requirements of the young of each species.
That said, Cow milk is not very similar to human milk. Both are about 88% water, but human milk has 7% carbohydrate, 1.3% protein, and 4.1% fat. Cow’s milk has about 4.5% carbohydrate, 3.3% protein, and 3.9% fat.

What’s really important is the types of fat, the protein levels and type of protein. Calves need to grow quickly, so there’s more protein in cow’s milk than in human milk. Humans need to develop their brain and nerves quickly, so there are less protein and more fat. 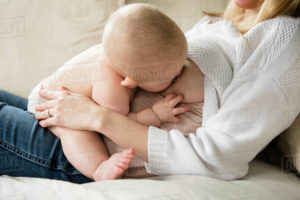 Protein:
Leucine is a unique amino acid which is linked with growth. Animals that grow quickly after birth have higher levels of protein and leucine in their milk; cows have 3.3% leucine, humans have 0.9% leucine. Calves double their birth weight in 40 days; humans double theirs after 180 days.

Another difference is the ratio of casein to whey in milk. Cow’s milk has a ratio of 80:20, human’s 40:60 casein: whey. Casein is harder to digest. So humans don’t have as much in their milk.

The higher level of unsaturated fatty acids in human milk reflects the important role of these fats in brain development. In humans the brain develops rapidly during the first year of life, growing faster than the body.

Human milk also contains the fatty acids arachidonic acid and docosahexaenoic acid, both of which are essential for brain development and functioning; cow’s milk does not contain these fatty acids.

Cow milk contains high concentrations of protein and minerals, which can stress a newborn’s immature kidneys and cause severe illness at times of heat stress, fever, or diarrhea. In addition, cow’s milk lacks the proper amounts of iron, vitamin C, and other nutrients that infants need. It may even cause iron-deficiency anemia in some babies, since cow’s milk protein can irritate the lining of the stomach and intestine, leading to loss of blood in the stools. Cow’s milk also does not contain the healthiest types of fat for growing babies. For these reasons, your baby should not receive any cow’s milk (or other non-human milk or milk substitute) for the first twelve months after birth.

Once your baby turns a year old

Once your baby is past one year old, you may give them whole cow’s milk or reduced-fat (2%) milk, provided they have a balanced diet of solid foods (cereals, vegetables, fruits, and meats). But limit his intake of milk to 2 cups (about 16 ounces) per day or less. More than 24 ounces a day has been associated with iron deficiency if todders arent’ getting enough other healthy iron-rich foods. If your baby is not yet eating a broad range of solid foods, talk to your pediatrician about the best nutrition for them.

At this age, children still need a higher fat content, which is why whole vitamin D-fortified milk is recommended for most infants after one year of age. If your child is or is at risk for having overweight, or if there is a family history of obesity, high blood pressure, or heart disease, your pediatrician may recommend 2% (reduced-fat) milk.

Do not give your baby 1% (low-fat) or nonfat (skimmed) milk before their second birthday, as it does not contain enough fat for brain development. After two years of age, you should discuss your child’s nutritional needs, including choice of milk products, with your pediatrician. 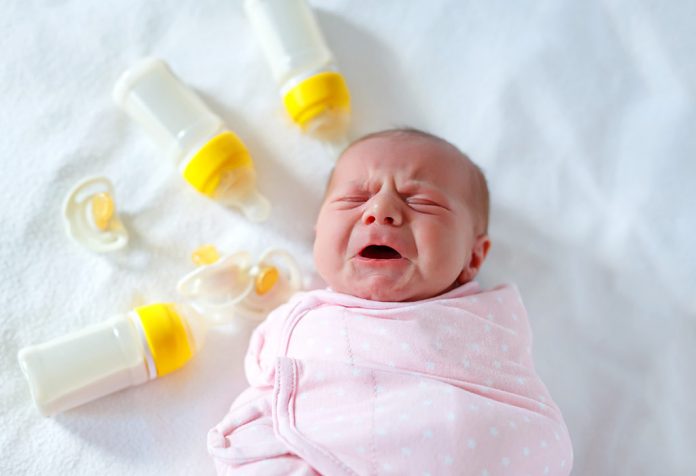 The composition of milk varies according to the animal from which it comes, providing the correct rate of growth and development for the young of that species, thus for human infants, human milk is obviously more suitable than cow’s milk. Indeed, the popular consensus among health care professionals is that ordinary cow’s milk, goat’s milk, condensed milk, dried milk, evaporated milk, or any other type of milk should not be given to a child under the age of one. This is because of differences in the composition of milk that have been revealed by research over the last decade or so. While cow’s milk and human milk contain a similar percentage of water, the relative amounts of carbohydrate, protein, fat, vitamins and minerals vary widely.

Can We Give Cow’s Milk to a Newborn Baby?

Cow’s milk isn’t recommended to newborn babies for a variety of reasons.

While feeding milk is not advised, milk-based products such as yoghurt and cheese are still considered acceptable for babies below one year of age. However, we should refrain from offering them cow’s milk independently. This is because the amount of sodium in cow’s milk is much higher than what a baby’s kidneys can handle.

When to Introduce Cow’s Milk to Kids

Most parents who feed formula milk to their babies are keen to transition to cow’s milk. This is mainly because formula milk is expensive and exclusively for the baby’s consumption. Cow’s milk, on the other hand, is purchased for the whole family anyway, making it a cheap alternative. If the baby doesn’t have a family history of lactose intolerance or dairy allergy, he can be introduced to cow’s milk after 1 year of age.

As cows’ milk is a major component of non-breastfed infants’ diets, used almost universally in infant formula as the most common breast milk substitute, it has been scrutinized as a possible trigger of type 1 diabetes. An international meeting devoted to the subject of cows’ milk and type 1 diabetes concluded in 1999 that there was nothing unique about cows’ milk and that a number of different food types may be diabetogenic. Thus, the consumption of cows’ milk may influence the development of type 1 diabetes in genetically susceptible humans, but many other foods could be expected to act in a similar manner. Despite widespread acknowledgment that the induction of type 1 diabetes is multifactorial, the intense interest in cows’ milk (the so-called ‘cows’ milk hypothesis’) has overshadowed other factors. It is possible that this intense attention has led to a type 1 statistical error, leading to an overestimation of the effect.

Causes which parents should be aware of:

Cows’ milk is a nutrient-dense food consisting of varying amounts of carbohydrate, fat, and protein. The major constituents of cows’ milk are water (87.4%) and milk solids (12.6%), which includes vitamins, minerals, carbohydrate, fat, and protein. Cows’ milk is known to contain many nutrients, including varying concentrations of fat and water-soluble vitamins, minerals, trace elements, and salts. The principal carbohydrate in milk is lactose. The lactose content of milk varies by species. Cows’ milk contains about 4.8% lactose (12–12.5 g lactose per cup), whereas human milk has 7% lactose. In addition to lactose, minor quantities of glucose, galactose, and oligosaccharidesare present. Milk fat is a complex lipid existing as an oil-in-water emulsion. Milk lipids are mainly triacylglycerols or fatty acid esterswith glycerol, of which more than 400 have been identified. Phospholipids, sterols, waxes, and free fatty acids have also been identified.

Cows’ milk is a heterogeneous mixture of at least 20 proteins. Eighty percent of the total protein is casein proteins and 20% is whey proteins. Caseins are relatively heat-stable, whereas whey proteins are more labile. Casein can be fractionated into four major components: alpha, beta, kappa, and gamma casein. The whey proteins consist of α-lactalbumin, β-lactoglobulin, bovine serum albumin, and several minor proteins, including lactoferrin and lactoperoxidase.

Great variability of the human IgE response to cows’ milk exists. Many patients are allergic to more than one milk protein. The major allergens of cows’ milk are α-s1 casein and β-lactoglobulin.

Cooking Tips And Tricks To Live By