What cut of beef for brisket? Many people ask this question when looking to buy a piece of beef. And you may be wondering what cut of beef is the best for brisket and what exactly are you getting when choosing between different beef brisket cuts? ​Whichever cut of beef you use to make Brisket, there are a few things to look out for. All the cuts of meat below will produce great BBQ, but you want to consider these points.

What Is Beef Brisket?

With a little bit of time and the right cooking method, even the toughest piece of meat can be made delicious. Brisket, which comes from the breast of the cow, is a great example—it’s one of the least tender cuts of beef, but braised, smoked, or slowly roasted, it’s rendered soft and satisfying with incredible flavor. Fresh brisket is an inexpensive boneless cut that requires long, slow cooking to break down the collagen in the connective muscle tissues to achieve unctuous tenderness.

What Is Beef Brisket?

Brisket is a beef cut taken from the breast section of the cow beneath the first five ribs, behind the foreshank. It comprises the pectoral muscles of the cow, which supports much of the animal’s weight. Consequently, brisket can be a large cut of meat, between 3 and 8 pounds, and is rich in the connective tissue collagen, which makes the meat tough. A brisket is quite long and is usually divided in half and sold as two different pieces of meat.

How to Cook Beef Brisket

Since brisket is a very tough cut, the best methods for cooking are those that cook at lower temperatures for a longer period of time, such as braising and smoking. Brining is also an option, which will turn the piece of brisket into a corned beef; after the meat is cured in a brine, it is slowly simmered until tender.

Whether braised, brined, smoked, or even cooked in an Instant Pot, brisket needs plenty of time to cook. A smoked brisket, Texas-style, is rendered soft and delicious after eight to 12 hours at 225 F. A braised brisket, Jewish style, also cooks at a low temperature for at least three hours, as it absorbs the liquid from vegetables and the collagen fibers break down.

In general, brisket has a beefiness to it; how you prepare the beef brisket will determine how the brisket tastes. Brining and smoking infuse very specific flavors whereas a braising liquid will impart its own taste to the meat.

Once the full piece of brisket is cut in half, each half is given different names—the first cut and second cut—and sold as such. The first cut, also known as the flat cut, thin cut, or center cut, is the leaner piece of meat. The second cut—or point cut or deckle—has more flavor due to a bit of extra fat.

The first cut is more attractive and will slice up neatly. It’s a great choice for corned beef. The second cut is a favorite of Jewish grandmothers everywhere, as the fatty cap contributes to a rich and satisfying stew as the meat braises. Pitmasters also gravitate toward the deckle, as the preponderance of fat makes for a juicy smoked cut that shreds nicely.

7 Tips for Smoking Your Brisket to Perfection

Brisket is the primary cut for barbecue, corned beef, and Jewish pot roast. But it’s also the main ingredient in some other classic dishes like Romanian pastrami and Italian bollito misto. In England, brisket is a classic cut for a braised beef or pot roast. The classic Vietnamese noodle soup pho is made with brisket, and brisket is often curried with noodles in Hong Kong.

Where to Buy Beef Brisket

A beef brisket is usually available in the meat department of the grocery store; if you do not see any (or the size you need), it is worth asking the butcher. Keep in mind that a brisket will shrink down significantly when cooked, so you will need to purchase one that is larger than you would think. Plan on about 1/3 pound per cooked serving but should buy 1/2 pound per person when raw; keep in mind that the fat cap on a second cut will account for some of the weight.

When looking for a second cut, note that a “chuck deckle” is not always the same as a second cut brisket, as butchers have found that other tough meats well-endowed with fat make for cuts as successful as deckle when braised.

How to Store Beef Brisket

A raw brisket can be stored in the refrigerator for five to eight days in its packaging and when wrapped air-tight can be frozen for six to 12 months. Brisket is the type of dish you often cook ahead of time (especially when braising, so the gravy fat has time to separate), so you may need to store the meat in the refrigerator until ready to serve. Wrapped well, the brisket will remain fresh up to four days in the fridge and two months in the freezer; you can store it with or without the gravy.

What is the difference between the flat cut and the point cut of a beef brisket?

First, let’s talk about what brisket is. Brisket is the chest muscle of a cow located near the front legs. As the cow stands and walks around, that chest muscle gets a good workout, making the meat tough, but also really flavorful. Because of the large size of a full brisket (8–16 pounds), it’s halved for commercial sale, creating the flat and point cut.

The flat cut makes up the majority of the brisket. It’s long and thin with a thick layer of fat on top that keeps the meat moist when cooked. This cut is best for slicing and most likely what you’ll find in your supermarket. It’s also the best cut of brisket to use for Homemade Corned Beef.

The point cut is thicker, smaller, and marbled with more fat and connective tissue than the flat cut. There’s a lot more flavor from the extra fat, but not as much meat, which is why it usually gets ground into hamburger meat or shredded for sandwiches. 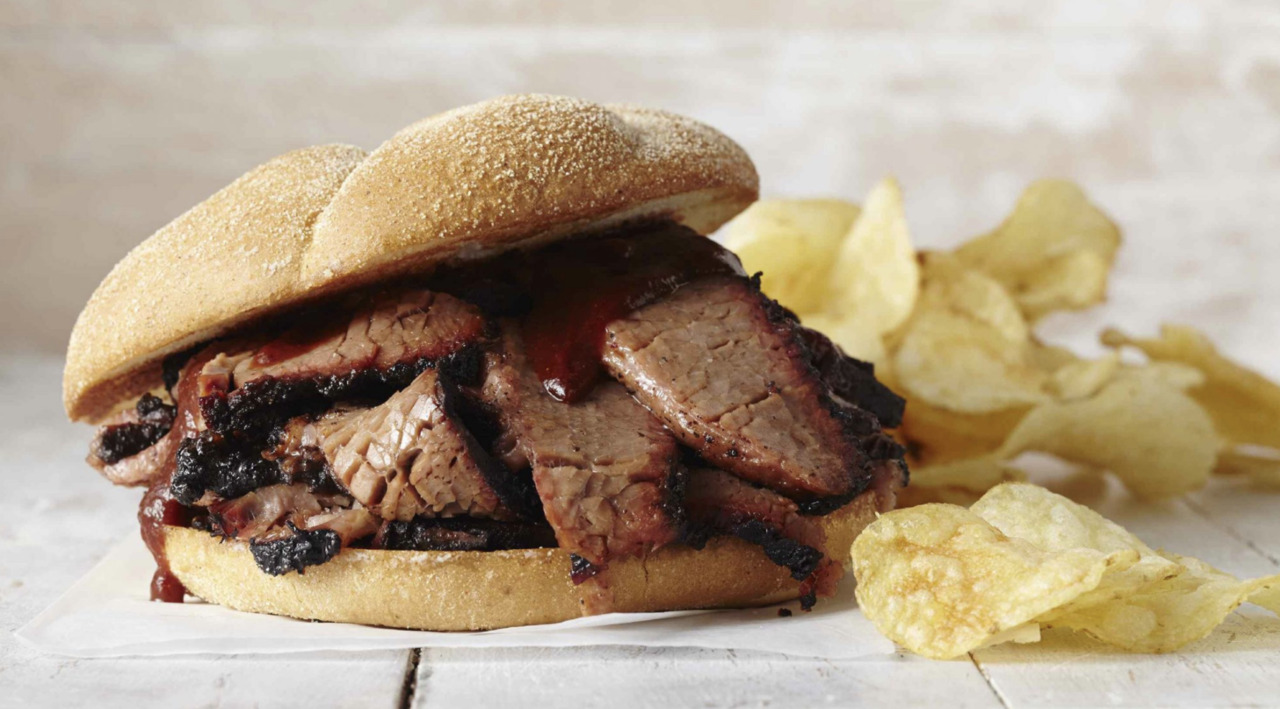 This cut of meat is a common choice for corned beef, Texas barbeque, and much more.

During our yearly visits to see family in Texas, getting our hands on some Texas-style smoked brisket was always top of mind for my family. It’s tender to the point of falling apart, and so full of smoky flavor.

But something different might come to mind when you think of brisket. This is because brisket actually refers to a specific cut of meat, from which many different dishes are made. Here’s everything you need to know about brisket, including where it comes from, how to buy it, and how to cook with it.

What Part of the Cow Is Brisket?

Brisket is a cut of beef that comes from the lower breast or pectoral muscles of a cow. Because this area is so well-exercised, it makes for quite a tough piece of meat that’s full of connective tissue. This is why it’s best suited towards a low and slow cooking process.

Brisket can be a rather large cut of meat, with a full brisket (sometimes known as a “packer brisket”) weighing between 10 and 14 pounds. It actually consists of two muscles that overlap: the “flat,” or the “first cut,” which is the thinner part, and the “point,”— also called the “deckle point” or the “second cut” — which is the thicker and fattier section of the brisket.

How to Buy Brisket

How you plan to cook your brisket matters when it comes time to buy it. As I mentioned earlier, there are two different cuts of brisket, each one lending itself to different cooking methods and dishes.

A full brisket can weigh upwards of 14 pounds, so it’s not commonly found at your standard grocery store. For that, you’ll need to go to a butcher. However, more and more grocery stores are beginning to sell cuts of brisket (i.e. the flat and the point). For most people, a cut of brisket will be more than enough, with ½ pound of raw brisket equaling about one serving.

The biggest question to consider when purchasing brisket is which cut to buy — and it all comes down to how you plan to cook it.

The first cut of brisket (AKA the flat cut) is larger and more uniform in shape. It has a thin layer of fat on one side, and is ideal for cooking in the oven or braising, as it is the leaner piece of meat. It also slices up more nicely, and is a common choice for corned beef.

The second cut of brisket (AKA the point cut or the deckle point) has a less uniform shape, and is well-marbled with fat. This high-fat content makes it ideal for smoking because it doesn’t dry out.

How to Cook Brisket

There’s no one way to serve brisket — smoked brisket is a favorite in the American Southwest, while corned beef and cabbage is tradition on St. Patrick’s Day (though more of an American tradition than an Irish one).

Brisket is a traditional dish in Jewish cuisine as well, especially on Rosh Hashanah and Passover. In England, brisket is often braised and served in roasts. Of course, two of the easiest methods for preparing brisket are in the oven and in the slow cooker on low heat.

How to Store Brisket

Store raw brisket in the fridge in its original package for up to a week, or freeze in airtight wrapping for six months to a year. Once cooked, brisket will last about three to four days in the fridge, as do most leftovers.

How To Make Strawberry Shortcake Crumble With Oreos