If you are looking for interesting food with animal names, this is the right place. Here we share with you food descriptions in English and Chinese, along with Spanish and Korean.

All over the world, foods have been given names that mislead hungry eaters. You order duck and get a salty dried fish instead. Or you order oysters and are served a plate of freshly fried testicles. You’d think that since food is something we eat every day—and since food is something most people have very strong opinions on—that the names given to different dishes would pretty much always give us an idea of what we’re eating. But it’s just not so.

Here are foods that are not what you’d expect, from their names. All of these are suitable to serve at a last-minute April Fool’s Day celebration. That is if you dare.

“If it looks like a duck, swims like a duck, and quacks like a duck, then it probably is a duck.” Remember that saying? But what if it’s named a duck but isn’t one? Bombay Duck (above) isn’t a duck, it’s a fish—more specifically, a lizardfish (which, since I’ve actually caught one, I can say with assurance are among the ugliest fish in the world). In parts of India, Bombay Duck, prepared according to favorite recipes, is considered a delicious delicacy. 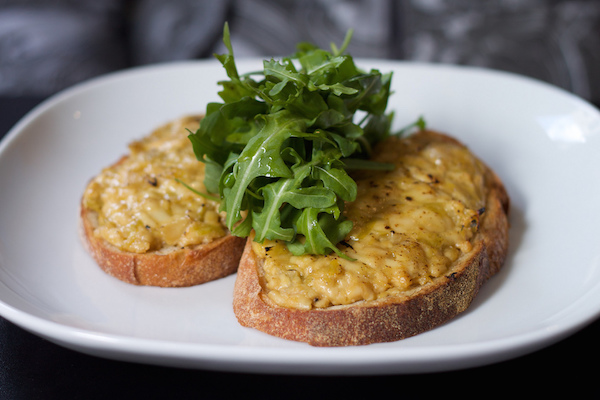 Photo by Tristan Kenney, CC BY 2.0
Also known as “Welsh Rarebit,” this food has nothing to do with either rabbits or rarebits. There are also Scotch Rabbits and English Rabbits, but nobody has yet recorded an Irish Rabbit. The recipe is made from the melted cheese and other ingredients (often beer) poured hot over toast. Related to Welsh Rabbit are Golden Bucks, Buck Rabbits, and Blushing Bunnies. Nobody has yet discovered the why or the where of the origins of this name.

If you’re looking for sweetened bread, this is not what you want to order. Though sweetbreads are fairly uncommon on menus today, they can turn up on the menus of upscale restaurants, where they’ll be known (in French, because in French everything sounds better) as “ris de veau.” Sweetbreads are the thymus gland of animals, and the one most often served is from a calf. The word was first recorded in the 16th century, but its origin is unclear. However, George Washington’s favorite food was reportedly a pie filled with sweetbreads. 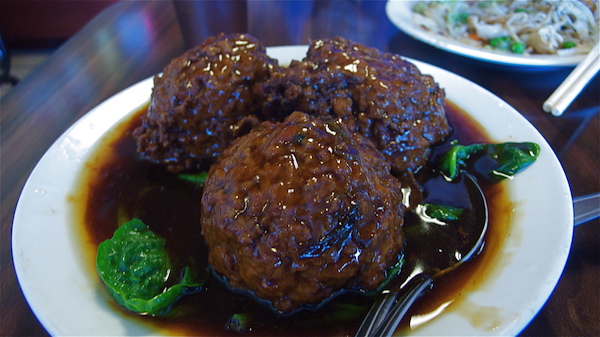 Photo by Michael C. Berch, CC BY-SA 4.0
Eating a lion’s head is simple. Especially when the lion’s head is actually a yummy meatball. This dish is common in Chinese cuisine, with a range of variations that include cabbage, bamboo shoots, tofu, and water chestnut. The base is usually ground pork. Usually, the meatball is fairly large and served in a broth or a sauce. The name “lion’s head” was bestowed on this dish because the large meatball looks like a lion’s head (if you have a poetic mind) and the cabbage can resemble the lion’s mane. 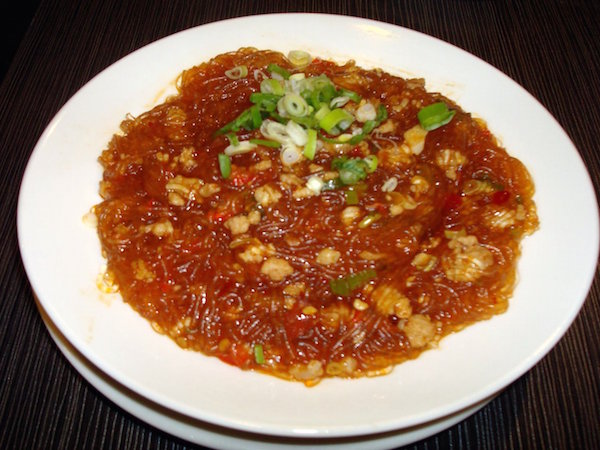 Photo by Takoradee, CC BY-SA 3.0
This traditional Sichuan dish is wonderful and warm, and though the name sounds a bit scary, the food actually is not at all scary. The “ants” are actually little pieces of ground meat, the “tree” is bean thread noodles. As is usual in many Sichuan dishes, there is heat in the recipe, provided by chili paste. The thoughtful name may bring other philosophic ideas to mind, as when Thoreau wrote: “It is not enough to be busy. So are the ants. The question is: What are we busy about?” A good answer, obviously, would be that we’re cooking this dish for dinner.

When is a cheese not cheese? When it’s made from ahead. Then it’s meat. If you wanted to be nice about head cheese, you might call it a galantine. A galantine is “a dish of white meat or fish that is boned, pressed, and served cold in aspic.” Headcheese is made all over the world, and though not very popular in the US, is enjoyed by many cultures. It’s actually part of the genre of cooking now called “nose to tail” and is made from the head of a pig, calf, cow, or lamb. 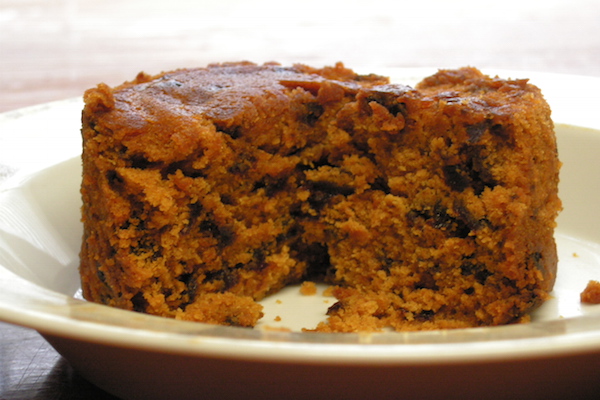 Photo by Tracy N Brandon, CC BY 2.0
It’s not what you think, as far as I can tell. Spotted Dick is the name of a traditional British steamed pudding. It’s made, unsurprisingly, of suet and dried fruit. In 2009 a catering company in Wales tried to rename it “Spotted Richard.” The name “dick” is supposedly an old-fashioned local term for “pudding”. For that very reason, If the pudding were to be served plain, it would be called “Dick.” If it were to be served with treacle sauce, it would be called “Treacle Dick.” Apparently there are a lot of dicks around, of all kinds. 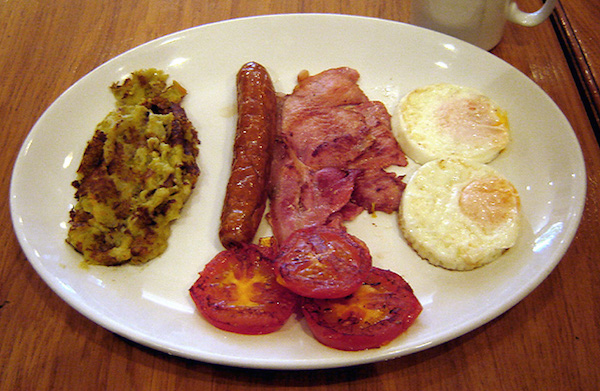 Photo by Tarquin Binary, CC BY-SA 2.5
This is a hash made of leftover vegetables, most well known in England, Scotland, and Ireland. It’s important to include cabbage in the mix because it’s the cabbage that supposedly squeaks as the hash is bubbling over the heat. Generally, the most common form of bubble and squeak is cabbage and potatoes, sometimes with onions added. The first mention of the name is in 1806 in Mrs. Rundell’s cookbook “A New System of Domestic Cookery.” If you get tired of calling it “Bubble and Squeak” you can also call it “Rumbledethumps.”

This year is the year of the tiger. The first dish is the tiger-skin green pepper. This dish is named after the hot peppers that are fried during the cooking process, so there will be some burnt patterns on the surface of the hot peppers, which look like tiger skins.

Sharp peppers are not easy to taste when cooking, but this method of tiger skin pepper is very delicious because the skin has been softened by frying, so it is especially delicious. Our family often makes this dish. Let’s share how to do it.

1. Sharp pepper, remove the root stalks, remove the seeds inside, and rinse them. If it is too long, you can also cut it from the middle.

2. Flatten the garlic and chop it into mince. When I made it, I added a little green onion and ginger to make it more delicious.

4. Put the oil in the pan, add the green onion, ginger, and garlic and fry until fragrant, add a little light soy sauce, add the fried green pepper, stir-fry for 2 minutes, add a little salt and chicken essence, and it will be out of the pan.

Yuxiang Pork is a famous Sichuan dish and is one of food with animal names. It is a famous Sichuan dish. The unique method of cooking fish seasoning has been widely used in Sichuan-style cooked dishes. For that reason, it has become a favorite dish of people all over the country. Hence, many restaurants have fish-flavored shredded pork dishes.

Donkey roll is one of the traditional snacks in Northeast, Beijing, and Tianjin. It is called “bean noodle roll” in the northeast. It originated in the northeast region and originated in Manchuria. Because Qing Dynasty’s eight-flag brothers liked sticky food, “donkey roll” soon spread to Beijing. Beijing has become a kind of flavor snack, which has been spread to the present.

It is named “Donkey Roll” because the soybean noodles sprinkled in the final production process are like the waves of loess raised when the donkey Sahuan rolls.

Ants on the tree, also called minced pork vermicelli, is one of the characteristic traditional dishes in Sichuan Province. It is named after the minced meat attached to the vermicelli, which looks like an ant crawling on the branch.

Moreover, ants on the tree are usually made (food with animal names)from vermicelli (or vermicelli), minced meat, carrots, green peppers, ginger, spring onions, coriander, and bean paste. The dishes are smooth and delicious, the color is bright red, spicy and not greasy, and has a unique flavor.

What are some cute food names?

There are a lot of cute food names out there, but some of our favorites include baby carrots, bitty bananas, little limes, and teeny tomatoes.

What is the weirdest food name?

There are many weird food names out there, but my personal favorite is “balut.” Balut is a fertilized duck egg that is boiled and eaten in the shell. It’s considered a delicacy in some parts of the world!

What are good food names for dogs?

There are a lot of great food names for dogs,(food with animal names) but some of our favorites include:
-Biscuit
-Cookie
-Pupcake
-Popcorn
-Pupchips
-Cheeseburger