Matcha has made a huge resurgence over the last decade. In fact, in just the past five years it has become the fastest growing food trend in the country. The world’s most popular beverage has been around for centuries, and although it’s been slow to gain popularity in America.

People are going batsh*t crazy over this stuff because you get all the same health benefits from consuming the powder as you would from eating the tea leaves.

And matcha actually tastes pretty good, whereas stuffing your face full of green tea leaves sounds absolutely dreadful. But aside from being delicious, this powerful green powder is packed with antioxidants and metabolism-revving EGCG.

Plus, it will give you a serious energy boost; matcha has the same amount of caffeine as a cup of coffee.

If that doesn’t convince you to hop on the matcha bandwagon, you should also know matcha goes way beyond a form of tea.

In fact, there’s an almost endless array of tasty treats you can whip up with this green tea powder, so I set out to find a bunch of mouthwatering matcha recipes, including smoothies, desserts, waffles and even chicken fingers.

Take a look at the pictures below to see matcha creations that will blow your mind.

Instagram these brightly-hued crepes and your friends will go green with envy. The batter is packed with fiber, thanks to whole-grain buckwheat flour, and you’ll get a hefty dose of antioxidants from the matcha powder you’ll mix in. These crepes work perfectly at breakfast, with some fresh fruit and whipped coconut cream. Or serve them for dessert, with a simple dark chocolate and coconut milk ganache. Photo and recipe: Genevieve / Gratitude & Greens

The only requirements for this easy breakfast or snack are chia seeds, milk and matcha powder. (We recommend using almond milk, as it’s natural sweetness mellows the sometimes-grassy flavor of matcha.) From there, add any mix-ins you like, from toasted nuts, to fresh fruit or chocolate chips. Photo: Katelin / Nerdy Bites; recipe: Joey / Tasty

Take one sip of this creamy, slightly earthy beverage and you’ll want to bid adieu to espresso-based lattes for life. The naturally sweet and rich coconut milk will pair so well with your green powder that you may never crave a pumpkin spice version again. Photo and recipe: Jeanine / Love and Lemons

Healthy fudge? Now we’ve seen everything. A combination of cottage cheese and psyllium husk give this treat a healthy dose of protein and fiber. Coconut butter lends a luscious texture, while shredded coconut, matcha powder and stevia create a subtly sweet flavor. Photo and recipe: Jessica / Desserts with Benefits

On its own, matcha can have an intense, sometimes bitter taste. In this green granola recipe, roasted nuts and juicy blueberries do wonders to tone down its strong green flavor. Plus, serve it up for breakfast and you’ll get that much-needed a.m. caffeine boost. Photo and recipe: Cheryl / 40 Aprons

Matcha and mochi are a match made in heaven. In these healthy treats, tart yogurt balances the grassy matcha flavor while bits of chewy, sweet mochi add some texture to each pop. Photo and recipe: Molly / My Name is Yeh

Matcha is the ideal addition to a pre-workout shake thanks to its mellow caffeine boost and ability to promote “calm alertness.” This mix has a subtle green tea flavor that’s complemented by the addition of a vanilla bean. Photo and recipe: Perry Santanachote / Life by Daily Burn. 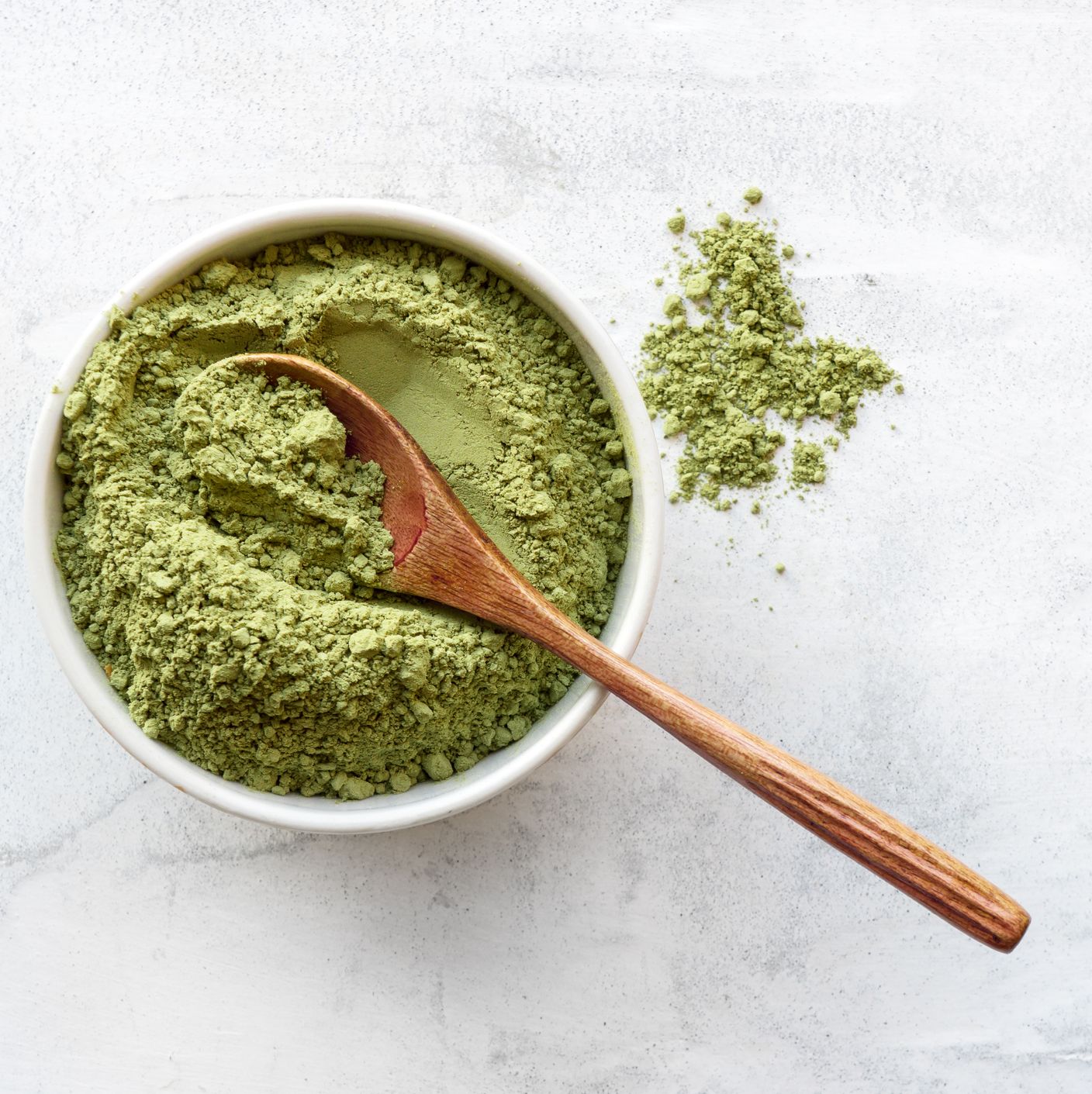 Over the past few years, matcha has grown in popularity because of its bright green color, health benefits, and the fact that it makes for a lovely latte. Matcha is part of the green tea family, but it’s unique. Unlike traditional forms of green tea where you steep leaves in water, matcha is the powder made from ground-up tea leaves. Because of this, when you consume matcha, you’re getting a higher concentration of the leaves’ nutrients (translation: more benefits).

These days, you can pretty much find it at any American coffee shop. But matcha’s rich history dates back to the twelfth century and has been an important component of Japanese tea culture for more than 800 years. “The most famous story is that Japanese Buddhist monk Myoan Eisai left for China to find green tea. Eisai realized that drinking matcha before meditation would help maintain his concentration, and he brought the matcha to Japan,” says Asako Miyashita, MS, RDN, a registered dietitian nutritionist in New York.

It’s important to note that Japanese matcha and American matcha kind of exist in separate bubbles. The American version of matcha can be found in matcha lattes at places like Dunkin’, while Japanese matcha is very much connected to the tea ceremony, a ceremonial way that green tea is prepped and presented (which would never be available in a drive-thru).

Keeping that in mind, these are some of the matcha benefits that might convince you to switch from your daily coffee to maybe a daily matcha latte. If you want to make matcha at home, scroll on.

1. It’s loaded with antioxidants and vitamins.

Matcha also contains a variety of vitamins including vitamin A, B, C, E, and K, Miyashita says.

Miyashita recommends trying matcha instead of coffee for a week if you have skin concerns, because of its sky-high vitamin levels. Vitamin C stimulates collagen production when ingested according to this study in the journal Nutrients. And vitamin B can help to promote healthy skin cell turnover, according to a study from the Advances in Skin & Wound Care journal.

3. You’ll get more energy than you would from other teas.

4. You won’t feel as jittery as you might from a cup of joe.

“Matcha powder contains L-theanine, an amino acid that has been shown to reduce stress,” Gorham says. One 2016 study found that drinking a beverage with around 25 mg of L-theanine like green tea can be extremely effective at reducing stress and increasing the neurotransmitter gamma-aminobutyric acid (GABA) in the brain. “People say that when they drink matcha, they have a smooth alertness and don’t experience a ‘caffeine crash,’ which could have to do with the L-theanine component,” Gorham adds.

5. It can make you significantly more productive.

In a 2017 study published in Food Research International, people who drank matcha specifically (not just plain old green tea!) experienced a slight increase in attention and processing speed an hour later—likely due to a special combination of L-theanine, a major potentially energy-boosting polyphenol called epigallocatechin gallate (EGCG), and caffeine.

So on your busiest workdays, splurging on a matcha latte (which can be upward of $5, if the matcha powder is good quality) might just be the perfect investment. Or, you can always DIY one.

6. Matcha could help ward off cancer.

While there’s no specific research proving the anti-cancer benefits of matcha powder itself, scientists have been reviewing green tea as a category for years. Older studies have linked the powerful antioxidant EGCG to cancer prevention and preventing colon cancer cell growth. One other study indicates that green tea could be effective in synergy with anticancer drugs for cancer prevention. It’s the EGCG that’s the magic compound, which might inhibit cancer cell growth by killing malignant cells.

EGCG strikes again: Science hasn’t exactly concluded why, but a 2016 review of studies suggests that thanks to this compound, consuming green tea regularly can result in a significant reduction in bad cholesterol (often called “LDL”). LDL is the type of cholesterol that leads to a buildup of fatty acids in the arteries, which some experts say increases your risk for heart attack and stroke.

8. It can strengthen your bones.

Most people don’t think about actively taking measures to build bone strength, but it’s important for your fitness and mobility, especially as you age. Polyphenols, the antioxidant-packed compounds in green tea, may increase bone mineral density (as in, how solid your bones are) by reducing inflammation-causing oxidative stress on the bones. That in turn can lower your risk of developing osteoporosis, according to several past studies.

9. It can be more filling than a cup of coffee or brewed tea.

Matcha powder has a strong, earthy taste, so it’s most often whisked and served with milk or a non-dairy alternative, like almond or oat milk. Because of the added calories from the milk, the drink tends to be as satiating as your average espresso-based latte.

But note that “some coffee shops and restaurants might use a mix that has sugar and/or powdered milk to balance out the earthy flavor, which makes it less healthy than straight-up matcha powder,” says Gorham. Ask your barista if they use actual matcha powder or a pre-made mix and if the latter, what’s in it. “Non-dairy milks might be sweetened too, so just be conscious of how much sugar you’re consuming, as that can overpower its benefits,” Gorham adds.

10. It works really well as a natural food dye.

There’s some older research suggesting that artificial food dyes (you know, the kind you baked with as a kid) may be carcinogenic (linked to cancer). This is why when there’s an opportunity to color food using natural sources, you should take advantage.

5 Genius New Ways to Use Matcha

Quality matcha powder is grown in the shade versus instead of under the sun in order to force the leaves to overproduce chlorophyll, according to Japanese matcha brand BeMatcha. The OTT chlorophyll content is what gives matcha powder its rich green color—and that color will take over pretty much anything it’s mixed with.

So for baking, cooking, and even cocktail-mixing needs, add a little matcha powder for a naturally green (and nutritious!) treat. Something to remember whenever you want to impress people at your next dinner party.

How can you make matcha at home?

You don’t have to go to your nearest coffeeshop to get matcha. In fact, you can make a version at home with minimal kitchen gadgets. “Traditionally, Japanese people use a bamboo whisk and ladle to make matcha tea. If you don’t have it, you can use a spoon,” Miyashita says. Here’s how:

3. Mix thoroughly with a spoon to remove lumps of matcha. If you have a bamboo whisk, mix matcha with it until frothy. Now that you have your concentrated matcha, you can either fill the glass up the rest of the way with water or milk. (If you don’t have a whisk, a fork will do.)

Make Mine a Matcha

If you spend a lot of time in coffee bars, maybe you’ve noticed people switching to matcha lattes lately. Where green tea is made by steaming leaves, matcha means “powdered tea” and typically is ground into a fine powder from Japanese green tea leaves with stems and veins removed. The plants are grown in shade that may increase the chlorophyll, giving the powder that deep green color. With green tea, the leaves are discarded after steeping in the water. With matcha, the powder is dissolved into the liquid.

One trick we’ve learned is to use a caffeine hit as a time to get in extra calcium. By adding milk to your matcha latte, you get a nice dose of calcium along with potassium, phosphorus and vitamins D and A.

Stuffed Chicken With Brie And Apple