Whose idea was it to make nachos? Whoever it was, this simple and delicious invention is a favorite of many. Ground beef for nachos recipe is an easy way to spice up your next gathering or party. The best part about using ground beef for nachos is how cheap it is to make. And since it’s so easy, you can easily put together an impromptu meal that will leave a lasting impression on your guests.

A tray of these easy homemade nachos with ground beef makes a fun weeknight dinner or a festive party appetizer. Learn how to make nachos by just layering the chips, cheese, meat and jalapeños on a pan, and then popping them in the oven for about 10 minutes. Pile on your favorite toppings — such as tomatoes, sour cream, avocados, olives and cilantro — or let your guests customize their plates. A simple loaded nachos recipe is always welcome at the table!

There’s something so fun about a meal that you can eat with your hands! Homemade nachos are a favorite around here, since we can design our own plates to make them exactly how we want them. Set up a nacho bar — it’s a perfect dinner for picky eaters!

My youngest keeps his beef nachos simple with just the cheese, chips, meat and salsa, while the rest of us pile on the toppings. With zesty ground beef, two different types of melty, gooey cheese, and plenty of fresh ingredients like avocado, tomatoes, and green onions, it’s a delicious combination of flavors and textures. Best of all, the meal is quick, easy, and perfect for busy weeknights!

WHAT KIND OF CHEESE DO YOU PUT ON NACHOS?

You’ll find two different types of cheese on nachos: grated cheeses or a cheese sauce (typically made with Velveeta, like you find at ball stadiums and movie theaters). These homemade nachos call for real blocks of shredded cheese in any flavor combination that you prefer. I use half sharp cheddar (for its flavor and tang) and half Monterey Jack (for its oozy, melty texture). Other good options include Pepper Jack and Colby.

This is a quick overview of the ingredients that you’ll need for a simple nachos recipe. As always, specific measurements and complete cooking instructions are included in the printable recipe box at the bottom of the post.

HOW TO MAKE NACHOS IN OVEN

I’ll show you how to make nachos at home — it’s so darn easy! If you can brown some ground beef, you’re halfway there…

HOW LONG TO BAKE NACHOS

Keep an eye on the nachos and pull them out when the cheese is melted and the edges start to brown slightly, about 10-15 minutes in a 425°F. 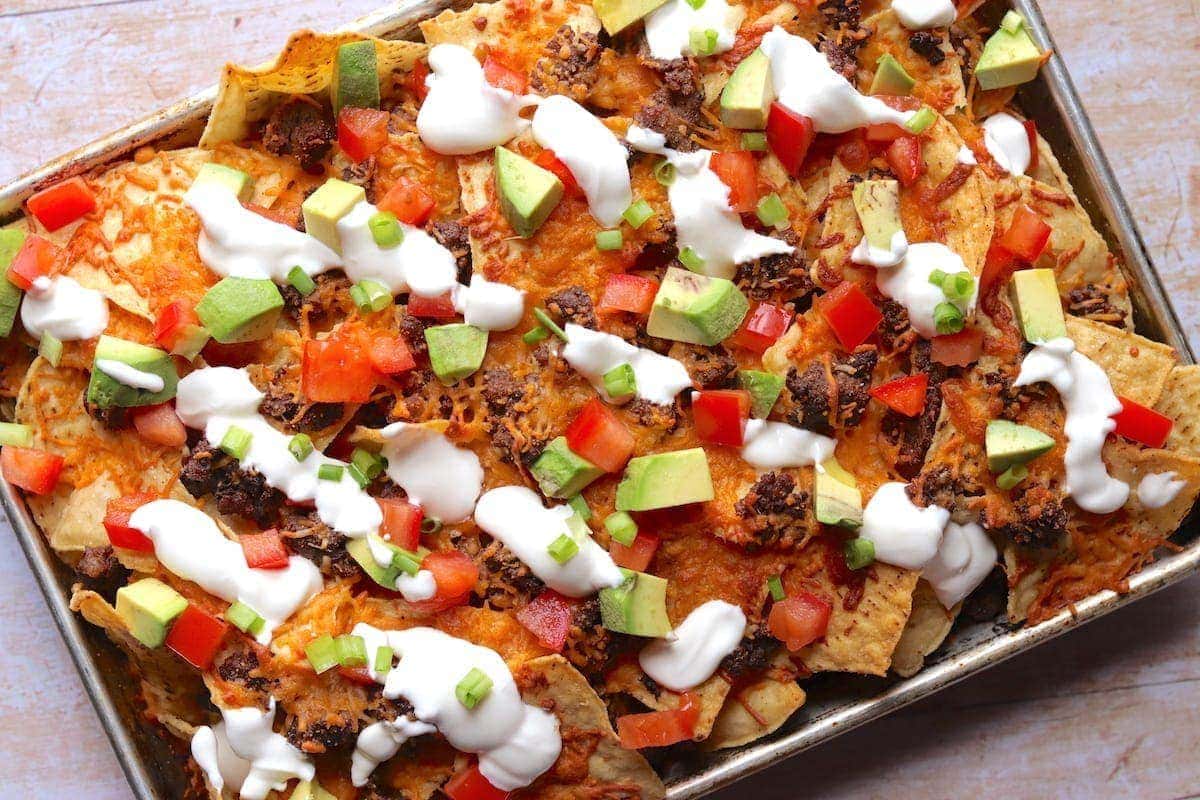 Seasoned ground beef is layered with tortilla chips and shredded cheese before they get toasty and melty. Then it’s topped with all of your favorite nacho fixin’s for an easy, delicious appetizer or meal.

I love nachos, in all forms. From the elaborate, restaurant-style versions with cheffy toppings, to the concession stand iterations with cheap chips and melted cheese sauce for dipping. But my favorite version is what I think of as dive bar nachos. You know, the ones that you order at your favorite watering hole to enjoy along side your drink of choice. This recipe is my ode to those.

The star of this nacho recipe is the seasoned ground beef. I made up my own seasoning mix that included chili powder, cumin, black pepper, garlic powder, and cayenne, but feel free to use any taco seasoning you might have on hand if you prefer.

In my opinion, the key to great nachos is warm tortilla chips. That’s why for this recipe I bake them in the oven along with some shredded cheese until they get nice and toasty. This one simple step will turn any tray of nachos from good to great.

All that’s left after that is to add your favorite nacho toppings. Pictured here are diced tomatoes, dollops of sour cream, chopped green onion, and diced avocado. Some of my other favorites include pickled jalapeños, sliced black olives, chopped fresh cilantro, and sliced radishes. 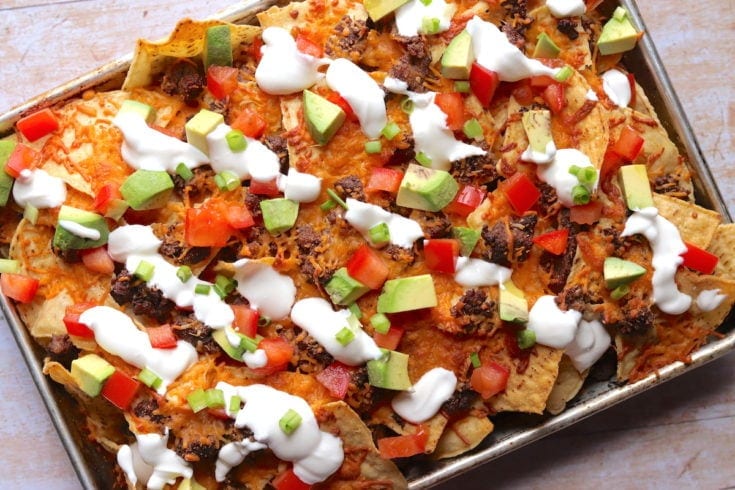 Yield:Serves 4 to 6 people as an appetizer; 2 to 3 as a main course

Seasoned ground beef is layered with tortilla chips and cheese before they get toasty and melty. Then it’s topped with all of your favorite nacho fixin’s for an easy, delicious appetizer or meal.PRINT

You can use whatever size sheet pan you want. Pictured here is a quarter sheet pan (9-by-13 inches) where I did a double layer of chips, cheese, and meat. For a half sheet pan (13-by-18 inches), a single layer will do.

THE BEST HOMEMADE NACHOS LOADED WITH JUICY GROUND BEEF, ALL-NATURAL NACHO CHEESE SAUCE AND ALL YOUR FAVORITE TOPPINGS!  YOU WILL START WITH ONE CHIP AND END WITH ZERO SELF-CONTROL. 😜

These craveable loaded nachos are the only recipe you’ll ever want – crispy, creamy, juicy, fresh – with the BEST ground beef and nacho sauce! They are the ultimate crowd-pleasing sharable comfort food that can be served as an appetizer, snack or full meal (perfect for Game Day)!  Best of all, this nacho recipe can be prepped ahead for easy assembly with endless variations.  What sets this beef nacho recipe apart is the addicting juicy ground beef blended with homemade taco seasoning, creamy refried beans, punchy salsa and tangy green chilies and the luxuriously creamy, punchy homemade nacho cheese sauce you’ll want to slather on everything – no bland, boring or dry nachos here!  Finish off your mouthwatering nachos supreme with sour cream, guacamole, pico de gallo, olives, pickled jalapenos for the ultimate mouthwatering party food!

HOW TO MAKE NACHOS VIDEO

WHAT MAKES THIS THE BEST NACHO RECIPE?

Nachos have to be one of the most addicting comfort foods on the planet from their dig-right-in appeal to their mashup of flavors and textures in each crunchy, juicy, creamy bite.  So, as a nacho connoisseur, it was important for me to get this recipe right.

I can confidently say homemade nachos do not get any more fabulous than this ground beef nacho recipe.  So, what does it take to make the best loaded nachos? It starts with creamy seasoned ground beef, homemade nacho cheese sauce and fresh toppings along with a few tips and tricks. Let’s take a closer look:

WHY THIS NACHO RECIPE WORKS:

The chips are never soggy.  By using a combination of sturdy tortilla chips and popping them in the oven for 5 minutes, we avoid the pitfalls of many soggy nacho recipes.

The nacho cheese sauce is made with natural ingredients. We may love nacho cheese sauce but we don’t love are processed cheeses.  Thankfully, my quick, easy homemade nacho cheese recipe is loaded with Monterrey and mozzarella cheese so it’s extra silky with a kick of sharp cheddar for flavor.  Sour cream keeps it extra silky and green chilies, pickled jalapenos and seasonings elevate it to the most flavorful nacho sauce you’ve ever tasted.

You’ll want to devour the ground beef on its own. I modified my favorite burrito filling to make this ground beef topping because it’s so good, I always end up eating it with a spoon – and now chips! It’s juicy, creamy, perfectly seasoned and the ideal spreadable consistency without making the nachos soggy.

The ground beef and refried beans are combined.  Too often homemade nachos are a haphazard mashup resulting in beans on one chip and beef on another; you’ll get one creamy bite, one juicy bite and one dry bite. By combining the ground beef and refried beans together along with sour cream and salsa, we’re rewarded with even distribution – no more dry beans, beef or bites!

The loaded nachos are layered for even distribution.  The chips, nacho cheese then ground beef are layered in two rounds to create the most incredible stacks of loaded cheesiness in every bite.  Just try and find a chip that’s plain!

The toppings are flexible – feel free to use shortcuts! While I highly advocate a combination of fresh and creamy toppings, you can use as many or as few as you wish!  You can make the toppings from scratch or use shortcut store bought nacho sauce, pico de gallo and guacamole.

These nachos are easy to make and can be prepped in advance. You can make the ground beef/refried bean mixture and the homemade nacho sauce days ahead of time and reheat when ready to assemble. The toppings can also be prepped and refrigerated one day ahead of time.

These homemade nachos can be eaten anytime, anywhere.  While we can all agree loaded nachos are a terrific anytime appetizer, party food, movie food, game night food and big game food, they can also be eaten as lunch or dinner!

THE HISTORY OF NACHOS

Nachos were created in 1940 in the border city of Piedras Negras, in Coahuila, Mexico.  As the story goes, a group of American army wives stationed at a military base in Eagle Pass, Texas passed the Rio Grande for a shopping excursion.  They stopped in the Victory Club in Piedras outside business hours looking for a bite.

All the cooks were off duty, but the maître d’hôtel, Ignacio Anaya, nicknamed “Nacho,” was determined to whip something up.  He quickly made an appetizer by topping fried corn tortilla chips with Colby cheese and pickled jalapeños and threw them in the oven.

The women raved about the dish and jokingly called them “Nacho’s special.” A short time later, the dish became a staple on the Victory Club menu, and soon every household in the region was making their very own “nachos.”  Eventually, Mr. Anaya moved to Eagle Pass, Texas and opened a restaurant called Nacho’s.

It wasn’t until 30 years layer in the 1970s that Frank Liberto, a businessman from Texas, introduced nachos to the American masses.   With the invention of emulsified cheese sauce and a pump, Liberto introduced ballpark nachos at a Texas Rangers baseball game in 1977 and later to football fans at a Dallas Cowboys game.  Nachos quickly became the must-have game snack at stadiums with movie theaters following closely behind.

Today, you’ll find every type of nachos from bulgogi to jerk pork to cheesesteak. My favorite kind, however, remains these classic loaded nachos.

WHAT ARE THE BEST CHIPS FOR LOADED NACHOS?

Chips can make or break your nachos.  Thin chips can quickly turn soggy and limp and/or break when you lift them.  Instead, look for the thickest tortilla chips you can find.  These will be the sturdiest and won’t get soggy as quickly.

I recommend checking out your bakery section for chips that were fried in-house or locally.  These are typically made from tortillas which make the sturdiest chips.  I have also had success with La Fortaleza Tortilla Chips, pictured in this recipe.  They are sold at Costco in two 3-pound bags for less than $9.

WHAT IS THE BEST BEEF FOR NACHOS?

The swoon worthy ground beef is packed with flavor from browning the meat with homemade taco seasoning, stirring in refried beans, salsa, and sour cream – drool.

INGREDIENTS FOR THE GROUND BEEF

When it comes to the best cheese for nachos, which should you use?  Shredded cheese or nacho cheese? I think it comes down to personal preference:

My favorite nacho cheese to use in this recipe is queso blanco. You’ll love that it’s:

Eating Right Without Going Crazy Or Breaking Your Budget