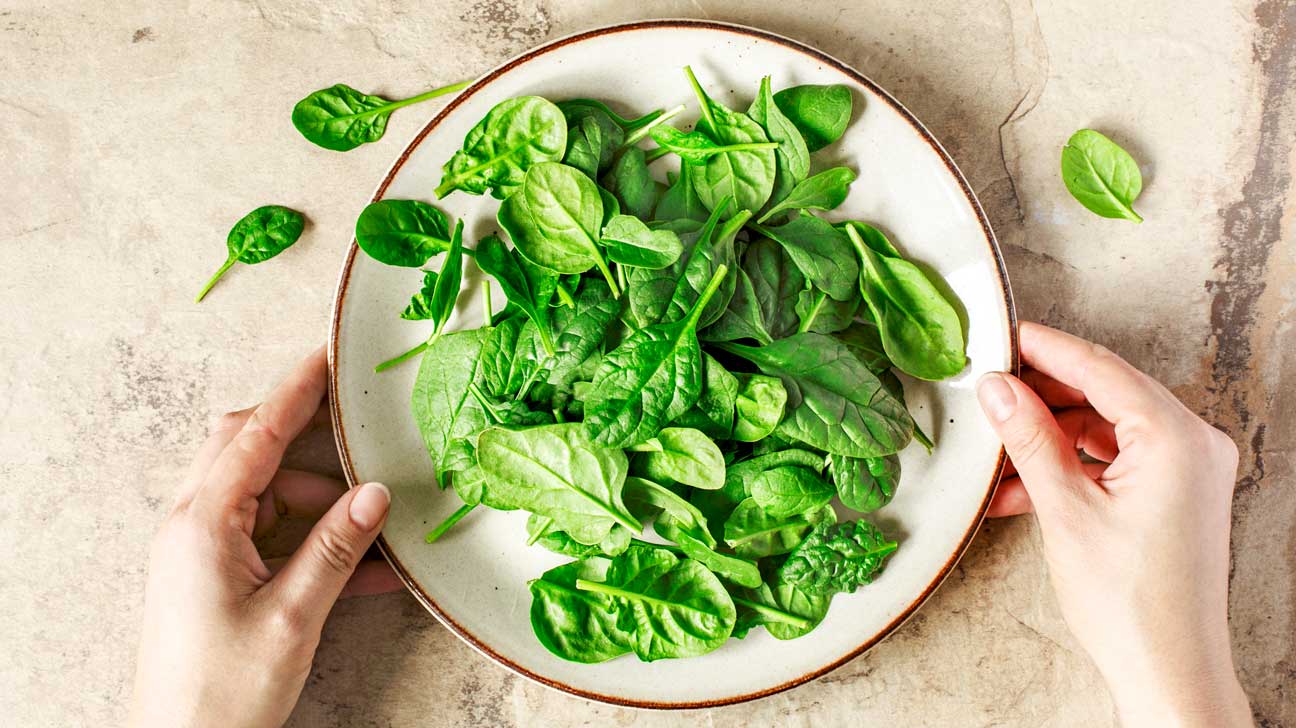 Of all the leafy greens, spinach is one of the most versatile. I whip it into smoothies, enjoy chilled spinach salads, steam and sauté fresh spinach, add it to stir frys, and even blend it into baked goods like brownies. Spinach also has many health benefits, and you can easily build it into your meals. Here are six perks of eating more of this powerfully protective plant, and simple ways to incorporate it into meals and snacks.

Three cups of raw spinach provides just 20 calories, no fat, 2 grams of protein, and 3 grams of carbohydrate with 2 grams as fiber (so 1 gram of net carbs). Though it has so few calories, spinach is packed with nutrients. A three cup portion provides over 300% of the daily need for bone-supporting vitamin K. Spinach also provides over 160% of the daily goal for vitamin A, and about 40% for vitamin C, which both support immune function and promote healthy skin.

Spinach also contains 45% of the daily need of folate, a B vitamin that helps form red blood cells and DNA. And spinach supplies 15% of the daily goal for both iron and magnesium, 10% for potassium, and 6% for calcium, along with smaller amounts of other B vitamins.

Spinach is high in antioxid

In addition to its many vitamins and minerals, spinach provides antioxidants tied to anti-inflammation and disease protection. These include kaempferol, a flavonoid shown to reduce the risk of cancer, as well as slow its growth and spread. Another, called quercetin, has been linked to possible protective effects on memory as well as heart disease and type 2 diabetes.

Spinach is a functional food

In a study published in the journal Food & Function, researchers summarize the protective effects of spinach, based on the activity of its naturally occurring phytochemicals and bioactive compounds. They state that these spinach-derived substances can reduce oxidative stress, DNA damage, and disease. They’re also able to positively influence the expression of genes involved in metabolism and inflammation. In addition, they trigger the release of satiety hormones, which can make you feel more full and satisfied.

For these reasons, the researchers conclude that eating more spinach may help fend off heart disease, cancer, type 2 diabetes, and obesity.

The anti-inflammatory effects of spinach make it a key contender for protecting the brain, particularly with aging. In one study, researchers tracked the eating patterns and cognitive abilities of more than 950 older adults for about five years. They saw a significant decrease in the rate of cognitive decline among those who consumed larger amounts of green leafy vegetables. The data indicated that people who ate one to two servings of leafy greens daily had the same cognitive abilities of a person 11 years younger than those who consumed no leafy greens.

Spinach is a source of naturally occurring nitrates, compounds that open up blood vessels to improve blood flow and ease the workload on the heart. In one small study, published in The Journal of Nutrition, 11 men and seven women consumed four different nitrate-rich drinks, including a spinach beverage.

Researchers found that blood nitrate levels increased after downing all four drinks. The spinach drink, in addition to those made from beetroot juice and rocket salad (another leafy green), also lowered blood pressure. Diastolic blood pressure remained lower five hours after ingesting the spinach and rocket drinks. (Diastolic is the lower number on the blood pressure reading, which indicates the amount of pressure in your arteries between beats.)

One of the antioxidants in spinach, called lutein, has been shown to reduce the risk of age-related macular degeneration (AMD), an eye disease that can blur the sharp, central vision required for activities like reading and driving. AMD is a leading cause of vision loss for people age 50 and older. There is currently no cure or treatment to reverse the condition, so prevention is key.

In one Japanese study, researchers examined the eyes of 11 healthy nonsmokers who consumed 75 grams of frozen spinach containing 10 mg of lutein daily for two months. The intake of lutein-rich spinach increased blood lutein levels, and it also increased measures of macular pigment optical density (MPOD).  That’s important, because macular pigment acts like internal sunglasses to protect the eyes, and low or decreased MPOD is a risk factor for AMD. This research indicates that spinach may help curb AMD risk.

How cooking spinach affects its nutrients

While I recommend incorporating spinach into both raw and cooked dishes, some research shows that not cooking the greens is the best way to preserve its lutein content.

In a Swedish study, spinach was purchased at a supermarket and then cooked using various methods for up to 90 minutes. The longer the spinach was boiled, the lower the remaining lutein level. When fried at a high temperature, a large percentage of the lutein degraded within just two minutes.

Scientists say the best way to consume spinach for maximum lutein intake may be in a smoothie combined with a healthful fat, such as avocado or almond butter. That’s because when spinach is chopped into small pieces, more lutein is released from the leaves, and fat increases the ability to absorb the antioxidant.

Older research found that cooking also impacts the folate content of spinach; boiling slashed this B vitamin level by nearly half. Steaming, however, resulted in no significant loss of folate, even after four and a half minutes.

A recent study looked at the effect of different cooking methods on the vitamin content in selected vegetables, included spinach. Researchers found that microwaving resulted in the lowest loss of vitamin K. Blanching significantly reduced the vitamin C content, which was best retained by steaming. Cooking also diminished the vitamin E levels in spinach, but increased the vitamin A content. This occurs when the plant walls soften, which helps to release and absorb the nutrient.

Again, for the best results, mix up how you consume spinach—some raw, some cooked—but try not to overcook it.

I recommend eating one cup (about the size of a tennis ball) of some type of leafy green every day. This can be as simple as placing a handful of spinach on a plate as a bed for whatever else you’re eating, so you get a few spinach leaves with each bite. For a quick and easy side dish, toss spinach with a simple vinaigrette made from whisking together extra virgin olive oil, balsamic vinegar, Dijon mustard, and dried Italian herb seasoning. Sauté spinach in extra virgin olive oil with sweet red bell peppers and crushed red pepper, or steam and toss the greens with jarred olive tapenade or dairy-free pesto.

If you’re making a grain bowl, place a handful of spinach on the bottom and flip the portion sizes of the greens and grains to up your veggie intake. Blend spinach into anything from a fruit smoothie to pancakes to hummus, and add it to soups, veggie chili, tacos—nearly any dish. According to a 2019 report, Americans are eating less spinach now than in 2007. It’s time to reverse that trend!

Spinach (Spinacia oleracea) is a leafy green vegetable that originated in Persia.

It belongs to the amaranth family and is related to beets and quinoa. What’s more, it’s considered very healthy, as it’s loaded with nutrients and antioxidants.

There are many ways to prepare spinach. You can buy it canned or fresh and eat it cooked or raw. It’s delicious either on its own or in other dishes.

This article tells you everything you need to know about spinach.

The nutrition facts for 3.5 ounces (100 grams) of raw spinach are (1Trusted Source):

Most of the carbs in spinach consist of fiber, which is incredibly healthy.

Spinach is high in insoluble fiber, which may boost your health in several ways (2Trusted Source).

It adds bulk to stool as food passes through your digestive system. This may help prevent constipation.

SUMMARYSpinach is low in carbs but high in insoluble fiber. This type of fiber may benefit your digestion.

Spinach is an excellent source of many vitamins and minerals, including (3):

Spinach also contains several other vitamins and minerals, including potassium, magnesium, and vitamins B6, B9, and E.

SUMMARYSpinach boasts many plant compounds that can improve health, such as lutein, kaempferol, nitrates, quercetin, and zeaxanthin.

Spinach is extremely healthy and linked to numerous health benefits.

It has been shown to improve oxidative stress, eye health, and blood pressure.

Free radicals are byproducts of metabolism. They can cause oxidative stress, which triggers accelerated aging and increases your risk of cancer and diabetes (11Trusted Source).

However, spinach contains antioxidants, which fight oxidative stress and help reduce the damage it causes.

One study in eight healthy people found that spinach helped prevent oxidative damage. Although this study was quite small, its findings are backed up by other animal and human research (12Trusted Source, 13Trusted Source, 14Trusted Source).

Spinach is rich in zeaxanthin and lutein, which are the carotenoids responsible for color in some vegetables.

Human eyes also contain high quantities of these pigments, which protect your eyes from the damage caused by sunlight (15Trusted Source).

Spinach contains two components, MGDG and SQDG, which may slow down cancer growth.

In one study, these compounds helped slow tumor growth in a person’s cervix. They also decreased the size of the tumor (22, 23Trusted Source).

Spinach contains high amounts of nitrates, which have been shown to help moderate blood pressure levels and decrease your risk of heart disease (28, 29).

SUMMARYSpinach has a host of benefits. It may reduce oxidative stress, promote eye health, fight cancer, and regulate blood pressure.

Spinach is generally considered very healthy. However, it may cause adverse effects in some individuals.

Kidney stones are caused by acid and mineral salt buildup. The most common variety is calcium stones, which consist of calcium oxalate.

Spinach is high in both calcium and oxalates, so people who are at a high risk of developing kidney stones should limit their intake (32Trusted Source, 33Trusted Source).

Spinach is high in vitamin K1, which serves several functions in your body but is best known for its role in blood clotting.

As such, it could interfere with blood-thinning medication. People who are taking blood thinners, such as warfarin, should consult with their healthcare practitioner before eating large amounts of spinach (34Trusted Source).

SUMMARYPeople who are prone to kidney stones may want to avoid spinach. This leafy green is also very high in vitamin K1, which can be a problem for people on blood thinners.

Spinach is a nutritious, leafy green.

This vegetable has been shown to benefit health in several ways. Spinach may decrease oxidative stress, improve eye health, and help prevent heart disease and cancer.

If you’re interested in its health-boosting potential, spinach is an easy food to add to your diet.