A classic and indulgent breakfast, our version uses a few healthy swaps to lighten it up. Healthy French Toast is a real crowd pleaser and perfect for brunch. Light and fluffy French toast loaded with berries – it’s made with ingredients you probably already have in your kitchen and it’s super simple to make. 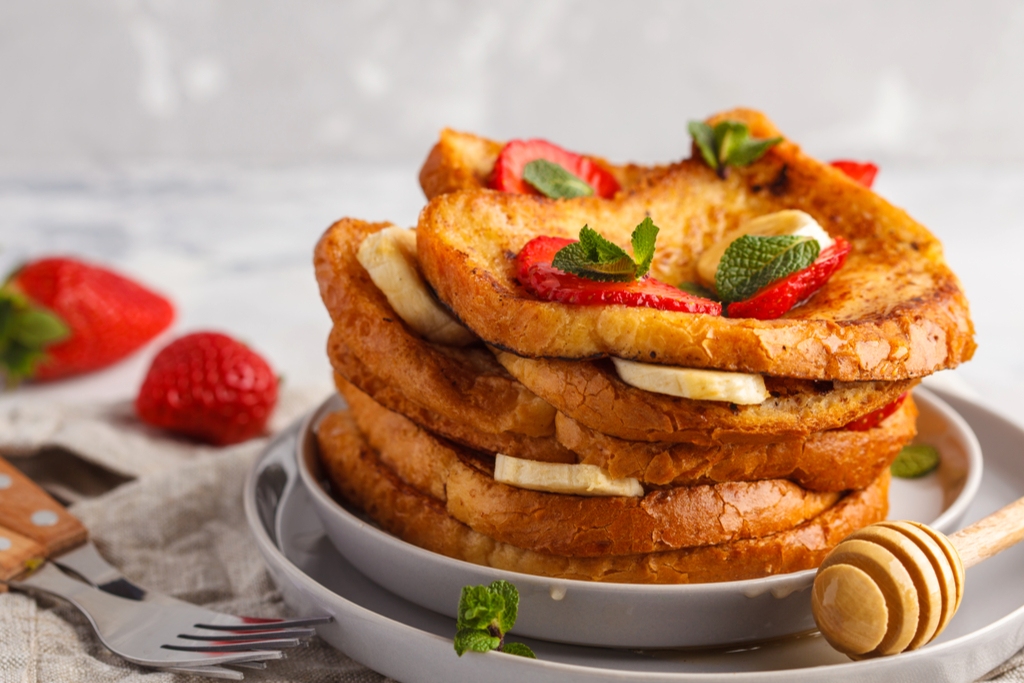 Just 8 ingredients and 10 minutes go in to making this Healthy French Toast, and it is much easier to make than you might think. A family favourite that kids will LOVE, it’s good for baby led weaning too. Bursting with orange, maple, vanilla and cinnamon, it’s a really warming and comforting breakfast that tastes far more indulgent than it actually is.

WHY SHOULD YOU TRY IT?

WHAT YOU WILL NEED

One: Put the eggs, milk, cinnamon, nutmeg, orange juice and zest, vanilla and maple syrup in a bowl and whisk.

Two: One by one, dip the slices of bread in to the mix until the are fully submerged and soak up all the mixture.

Three: Melt some butter in a frying pan and then one by one, fry the soaked bread slices for 2-3 minutes each side until browned.

Traditionally French toast is usually loaded with sugar in the egg mixture and then piled with calorie loaded toppings. We have made a few simple healthy swaps to lighten this up and make it a healthy French toast.

We did fry ours in butter, however you could just add spray oil to the pan instead. The only problem I find with this, is that is does burn more easily.

What is French toast without the toppings? Boring, that’s what! Here is where you can get really creative, but also where the calories can add up. Keep the toppings as light as possible, to keep this healthy French toast.

We loaded ours with a mixture of fresh berries (strawberries, raspberries and blueberries), however you could just go with some slices of banana, or go a tropical route with some grilled pineapple and mango. Add a splash of rum and you have yourself a party. Maybe not for breakfast though.

We added some creaminess with a dollop of fat free Greek yogurt. You would usually get some kind of cream with traditional French toast, but we saved some calories and fat with yogurt.

We added an extra drizzle of maple syrup, because life really is too short, however you can leave this out to save some more calories.

HOW TO MAKE IT GLUTEN FREE

The only change you need to make to make this gluten free is to swap the bread for your favourite gluten free variety. Everything else is naturally gluten free. Make sure that you are using pure maple syrup though, and not the fake stuff.

How healthy is French toast?

This is a much lighter version than traditional French toast as we have used wholewheat bread, less sugar and been careful with the toppings. Healthy is such a subjective word though, and what might be healthy for me might not be healthy for you.

What is the secret to really good French Toast?

The secret to really good French toast is the bread you use, and making sure that it is a couple days old so it doesn’t go too soggy. Also, adding some extra flavours helps to liven it up a bit. We went with warming flavours like orange, cinnamon and nutmeg.

What bread to use for healthy French toast?

For a really indulgent French toast, you would use slices of brioche. However, we have used wholewheat. You could also use slices of sourdough, French bread, plain white loaf, or challah.
You really can use any bread, and if you want to make this a budget friendly breakfast, then use whatever you have in your kitchen rather than buying something just to make this.
The key when it comes to the bread you do use, is making sure that it isn’t fresh. You want to use slices that are a couple of days old, so the bread doesn’t become too soggy when soaked. If all you have it fresh bread, then you can lightly toast it before you soak it.

Can you make healthy French toast without egg?

Whilst we haven’t tried this ourselves, you can use a little cornstarch. This will help to thicken the milk and helps the batter stick to the bread. You will still get crispy on the outside and soft and fluffy on the inside French toast, even without the egg.

Can you make vegan French toast?

You could either use the cornstarch tip above, or make a chia seed “egg”. Simply leave out the eggs and add a tablespoon of chia seeds to the milk and rest of the ingredients. You would need to use a plant based milk like almond or coconut and make sure that your bread is vegan friendly.

Is this French toast suitable for baby led weaning?

Yes, these are great for baby led weaning. Follow the instructions below to cut them in to sticks and then leave out the maple syrup, as babies don’t need the added sugar. Serve with some yogurt on the side and your little one can practise their dipping skills.

How to make French toast sticks

These are really easy to make in to sticks. Cut them in to 1 inch wide sticks and then dip them in the egg mixture and follow the rest of the instructions.

Can you freeze healthy French toast?

French toast actually holds up really well in the freezer. Firstly, make sure you don’t add any toppings to it. Then, wait for it to fully cool to room temperature and then individually wrap and then place in freezer bags. This will then keep fresh in the freezer for up to 2 months.
Once defrosted, you can stick it in the toaster to warm it up or in the oven for 5-10 minutes.