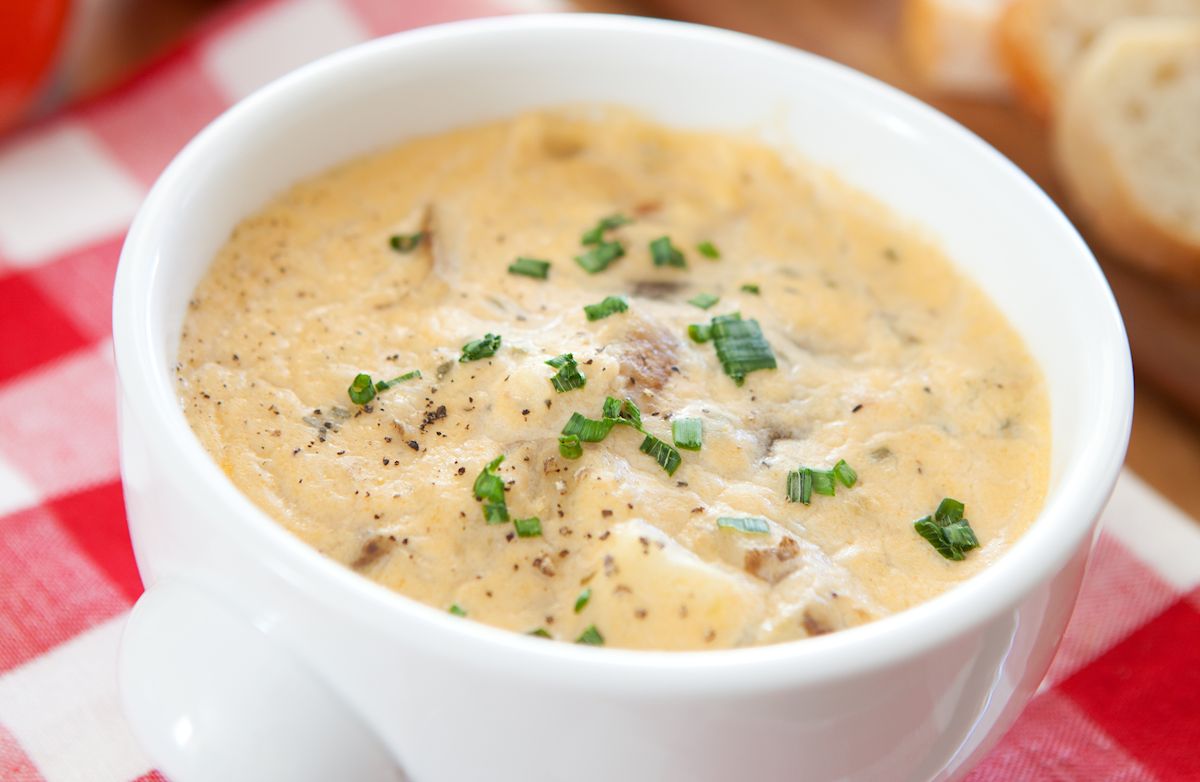 Healthy Potato Soup is total comfort food! Paleo, Whole30 + vegan, this easy creamy potato soup can be made on the stove, in the slow cooker or instant pot.

Our healthy potato soup gives you more flavor and less glop than the classic version, but just as much hearty satisfaction. With one simple extra step, the standard mashed potato process leads to a creamy soup adorned with all of your favorite baked potato toppings. If you like the idea of some chunks of potato, mash coarsely; for a smoother soup, mash more completely. For the best texture, stick with russet potatoes (aka baking potatoes); starchier varieties won’t yield as creamy a result. The soup reheats well, so it’s a good make-ahead candidate; just store the toppings separately.

Healthy Potato Soup. I mean.. do we really need to say more?

This soup is a DREAM come true. All the flavor of regular loaded baked potato soup with WAY better ingredients, and about 1/4 the calories/fat you’d normally find in it!

I know it’s hard to believe.. but this potato soup has NO dairy and is still ridiculously delicious.. I think you’ll love it!

Gotta love those glass-shattering moments when you recognize the possibilities of what you can do in your own kitchen, right?

Well, that was the case for me and this Healthy Potato Soup.  Dustin and I are big fans of baked potato soup and often order it at restaurants.

I mean, what’s not to love?  You have tender baked potatoes, creamy cheddar cheese, crunchy bacon pieces, crisp sliced green onions and some sour cream…are you kidding me?

Problem is – what likely makes it so terrifically delicious at restaurants is all the butter and heavy cream they add to it.

So, instead, I made my own light version and it’s still super good.  There’s not an ounce of heavy cream in this Healthy Potato Soup, which is more than I can likely say for most other recipes you’ll find.  Not that I am against cream, per se, but it does tend to make food less healthy.  And me more, well. hefty.

I use unsweetened almond milk and chickpea flour to make the soup thick and delicious without the added fat of butter and cream. Adding chicken stock makes it flavorful and it combines with the milk and flour mixture to make the soup velvety smooth. You won’t even notice leaving out the heavy cream – it’s still as lusciously creamy as ever. I also use plain Greek yogurt instead of sour cream to have more protein and less fat in the soup.

Grab a bowl of this (light and) hearty soup and enjoy!

This creamy potato soup is made with very simple ingredients. You’ll need:

For ingredient substitutions, see below in the green shaded box

HOW TO MAKE HEALTHY POTATO SOUP FROM SCRATCH?

You can also make this recipe in the slow cooker or on the stove top. Image 1 shows the soup in the crockpot before cooking.

And if you love creamy soups, you have to try this Healthy Broccoli Soup – it’s so good!

You can use any potato for potato soup. Red, baby, russet, and yellow will all work. I like to make this soup with red potatoes or russet potatoes.

Russet potatoes have the highest starch content in potatoes, which makes them thicken up considerably. If you love a thick, hearty bowl of potato soup – russets are your best bet.

If you prefer a creamier, lighter texture potato soup – yukon gold or red potatoes are probably a better option

Cut your potatoes small – Regardless of whether you make this in the instant pot, crockpot or stove top – you’ll want to make your potatoes small. The smaller they are, the quicker they will cook! You don’t want to have huge chunks of potatoes that take too long to cook.

Thicker soup – if you prefer thicker soup, you can leave some of the potatoes out rather than blending. Blend 3/4 of the mixture and stir in the remaining 1/4 of thicker chunks.

Get a food processor – This will make chopping your carrots, onion and celery SO simple.

Get a good vegetable peeler– If you are going to peel your potatoes – having a good peeler helps! This one is my favorite.

HOW TO STORE POTATO SOUP:

How long does this healthy potato soup last? This soup will last for up to 5 days in the refrigerator.

Reheating: You can reheat this potato soup in a pot or in the microwave.

Can potato soup be frozen? Yes it can! Store your potato soup in an airtight containers. When you’re ready to eat, defrost the night before by leaving this in the fridge, or take out of the refrigerator and heat over the stove/in the microwave.

Separation is normal and ok! Just stir it up.

There really is no wrong way for how to serve this potato soup. We love it with a loaf of crusty bread, or with a side of some veggies and chicken for a more balanced meal.

Here are some of our favorite healthy potato soup toppings:

Just a friendly reminder: if you are Whole30 – sour cream, cream cheese + crackers are not permitted. 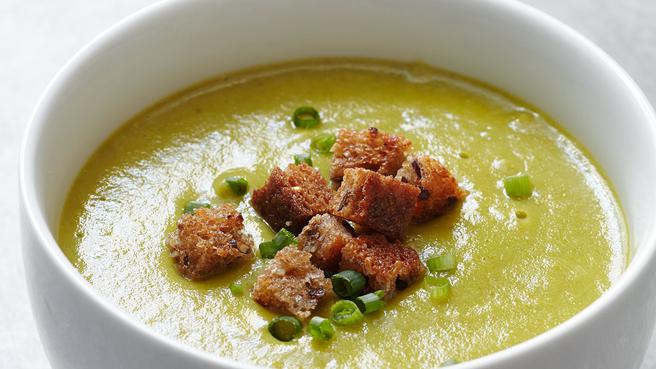 There are MANY substitutions for this recipe which is what we like about it. It’s easily adaptable to your own diet/needs.

Potatoes – You can use any potatoes in this recipe, red, baby, russet, and  yellow will all work.

Veggies– Feel free to add or omit more onions, celery or carrots to this recipe. Cauliflower would also be a great addition!

Blender – You can use an immersion blender, regular blender, or food processor to make this potato soup creamy.

To make soup chunkier – To make this soup chunkier, I recommend only pureeing some of it. You can mash some of the potatoes directly in the pot, and puree the rest. Stir the puree in with the chunks.

Herbs – If you don’t have fresh rosemary you can use 1/4 teaspoon dried rosemary. If you don’t like rosemary, you can also use thyme or parsley.

Broth – You can make this with bone broth, vegetable broth, or chicken/beef broth – any broth will work. I would recommend looking for low sodium

Ham – Many people enjoy ham in their potato soup. We have a Ham & Potato Soup Recipe or you can add ham to this after pureeing it.

We hope you love this healthy baked potato soup as much as we do. It’s truly the ultimate comfort food, no matter how you enjoy it! Get creative and make sure to tag us and share the recipe if you try it!

You can blend this soup with an immersion blender, regular blender, or even a food processor.

Allow the soup to cool for a few minutes if you can. It’s best not to take this right off the stove/instant pot/crockpot and put it in the blender. Give it a few minutes uncovered/off heat to release some steam.

Blend the soup in batches. It’s probably best to divide this in half and blend it 1/2 the batch at a time. By doing this you’re leaving room in the blender for the soup to move around.

Remove the center cover from the blender and cover with a towel instead.  Most blender tops have a removable plastic piece in the center. Take this center piece out and put a clean dish towel over the opening while blending. (You don’t want soup on the ceiling!). Doing this allows the steam to vent out and prevents pressure from building up in the blender. Make sure to hold your hand over the dish towel to avoid it from moving/splattering.

HAVE QUESTIONS? WE HAVE ANSWERS!

What can I add to potato soup for flavor?

Fresh herbs like rosemary, thyme, and sage add flavor to potato soup. You can also add Italian seasoning, more pepper, hot pepper flakes or cheese. This soup is flavorful on it’s own so you don’t need to worry about this!

Should I boil potatoes before adding to soup?

No need to boil your potatoes before adding them to the soup. In this recipe the potatoes cook right in the broth and get blended. It’s all in one pot!

How do you make potato soup thicker?

To thicken potato soup soup I add 1/4 cup of flour to a bowl and scoop out about 1 cup of liquid from the soup pot. Whisk the flour and broth mixture together until it’s a thick paste like consistency. Stir it into the soup and bring to a boil for 2-3 minutes, stirring continually.. You can add more flour directly to the pot and stir it in if necessary.

There are MANY substitutions for this recipe which is what we like about it. It’s easily adaptable to your own diet/needs.

How to Make It

Place potatoes in a Dutch oven; add cool water to cover by 2 inches. Bring to a boil over high heat; reduce heat to medium, and simmer until tender, 11 to 14 minutes. Remove from heat; drain. Return potatoes to pan; mash with a potato masher to desired consistency.

Weigh or lightly spoon flour into a dry measuring cup; level with a knife. Whisk together flour, milk, and stock in a medium bowl. Stir milk mixture into potatoes; cook over medium, stirring often, until thickened and bubbly, about 4 minutes. Remove from heat; stir in sour cream, salt, and pepper. Ladle soup into 6 bowls; top with cheese, bacon, and chives.

WHICH POTATOES ARE BEST FOR HEALTHY POTATO SOUP?

I love a combination of russet and red potatoes. I cube them and always leave the skin on for added color, texture, and taste. Leaving the skin on keeps the nutrient count up, too. Russet potatoes are starchy and that helps the soup thicken. Baby potatoes are an option, as are yellow potatoes. Cut the potatoes evenly if you can, to ensure the same consistency in every bite.

HOW TO MAKE HEALTHY POTATO SOUP VEGAN OR DAIRY-FREE

This Healthy Potato Soup is easily changed to suit a vegan diet. Simply do the following:

HOW TO STORE AND REHEAT HEALTHY BAKED POTATO SOUP

Keep leftover soup in an airtight container in the fridge for up to 4 days. The soup can be reheated in the microwave, stirring every now and then to distribute the heat evenly. Heating the leftover Healthy Potato Soup on the stove is another option. Again, stir until heated through to make sure it does not scorch on the bottom of the pan.

You can freeze Healthy Potato Soup, but the texture will change and won’t be quite as creamy. As long as you know to expect that the soup will be grainier and may separate, you’re good to go. Soups made with non-dairy milk like coconut milk, do fare a bit better when frozen but still aren’t as good as fresh or refrigerated soup.

This recipe is super good-for-you without sacrificing any of the creamy, savory taste. It’s a yummy, clean-eating soup at its best!