How much iron should you take if you have iron deficiency? There is some confusion about how much iron you should be taking if you have a low iron level. Most people believe that taking supplements with higher amounts of iron is the pathway towards building up your body’s need for it, so they choose supplements with high levels of ferrous sulfate. However, this can sometimes lead to severe side effects and can even cause more harm than good. So how much iron should you take if you suffer from an iron deficiency?

How Much Iron Should You Take If You Have Iron Deficiency

How much iron does my child need?

Iron is very important in maintaining many body functions, including the production of hemoglobin, the molecule in your blood that carries oxygen. Iron is also necessary to maintain healthy cells, skin, hair, and nails.

Iron from the food you eat is absorbed into the body by the cells that line the gastrointestinal tract; the body only absorbs a small fraction of the iron you ingest. The iron is then released into the blood stream, where a protein called transferrin attaches to it and delivers the iron to the liver. Iron is stored in the liver as ferritin and released as needed to make new red blood cells in the bone marrow. When red blood cells are no longer able to function (after about 120 days in circulation), they are re-absorbed by the spleen. Iron from these old cells can also be recycled by the body.

Iron deficiency is very common, especially among women and in people who have a diet that is low in iron. The following groups of people are at highest risk for iron-deficiency anemia:

Other less common causes of iron deficiency include:

What Are the Signs and Symptoms of Iron-Deficiency Anemia?

Symptoms of iron-deficiency anemia are related to decreased oxygen delivery to the entire body and may include:

How Is Iron-Deficiency Anemia Diagnosed?

Iron-deficiency anemia is diagnosed by blood tests that should include a complete blood count (CBC). Additional tests may be ordered to evaluate the levels of serum ferritin, iron, total iron-binding capacity, and/or transferrin. In an individual who is anemic from iron deficiency, these tests usually show the following results:

The peripheral smear or blood slide may show small, oval-shaped cells with pale centers. In severe iron deficiency, the white blood count (WBC) may be low and the platelet count may be high or low.

What Other Tests Will Be Done If Iron Deficiency Is Diagnosed?

Your doctor will decide if other tests are necessary. Iron deficiency is common in menstruating and pregnant women, children, and others with a diet history of excessive cow’s milk or low iron-containing foods. By talking with your doctor about your diet and medical history, your doctor may gain enough information to determine whether additional testing is needed. In patients such as men, postmenopausal women, or younger women with severe anemia, the doctor may recommend additional testing. These tests may include the following:

Sometimes it is difficult to diagnose the cause of iron deficiency, or your doctor may be concerned that there is a problem other than iron deficiency causing the anemia. These may include inherited blood disorders called thalassemiasin which red blood cells also appear small and pale, hemoglobinopathies such as sickle cell disease (but not sickle cell trait alone), or other blood disorders. People with chronic infections or conditions such as kidney failure, autoimmune diseases, and inflammatory disorders may also have small red blood cells. When the cause of the anemia is not clear, your doctor may refer you to a hematologist, a medical specialist in blood disorders,for consultation and further evaluation.

The average person needs to absorb just a small amount of iron each day to stay healthy (around 1 mg for adult males and 1.5 mg for menstruating females). To achieve this, however, we need to consume several times that amount. This is because our bodies absorb only a fraction of the iron contained in the foods we eat.

The Australian Recommended Dietary Intake (RDI) for iron is the amount of dietary iron required to meet the needs of most of the population. This amount is different for different age groups and life stages (See chart below). 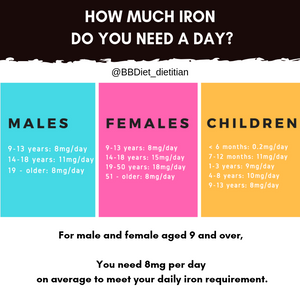 Certain people are at increased risk of iron deficiency, including:

1. babies given cow’s or other milk instead of breastmilk or infant formula

2. toddlers, particularly if they drink too much cow’s milk

4. menstruating women, especially those who have heavy periods

5. women using an IUD (because they generally have heavier periods), pregnant or breastfeeding women

6. people with poor diets such as alcoholics, ‘fad dieters’ or people with eating disorders

9. people with conditions that predispose them to bleeding, such as gum disease or stomach ulcers, polyps or cancers of the bowel

12. people who have a lower than normal ability to absorb or use iron, such as someone with coeliac disease. 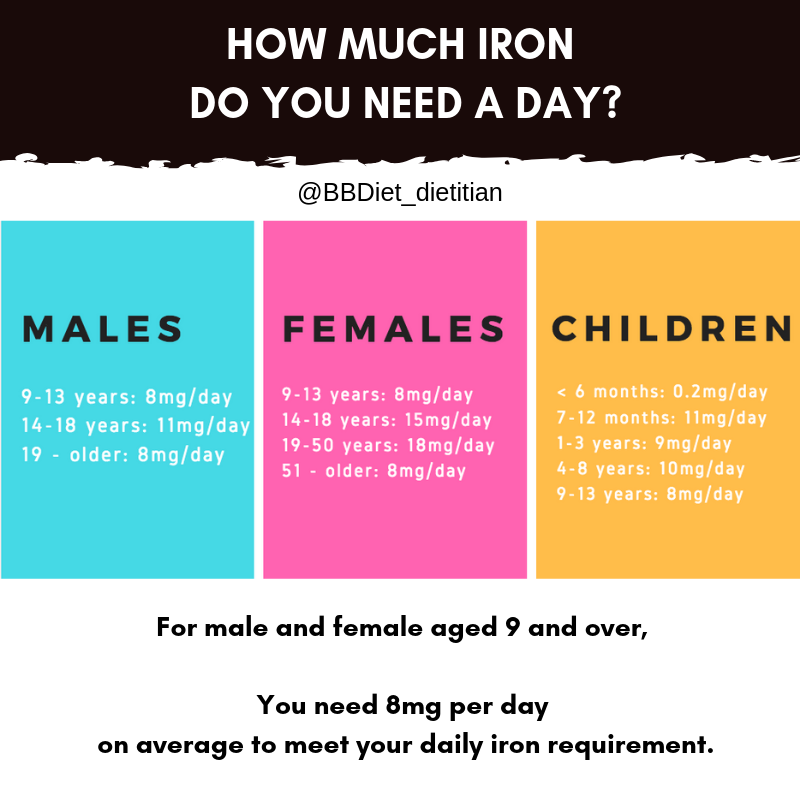 How Is Iron Deficiency Treated?

Even if the cause of the iron deficiency can be identified and treated, it is still usually necessary to take medicinal iron (more iron than a multivitamin can provide) until the deficiency is corrected and the body’s iron stores are replenished. In some cases, if the cause cannot be identified or corrected, the patient may have to receive supplemental iron on an ongoing basis.

There are several ways to increase iron intake:

The amount of iron needed to treat patients with iron deficiency is higher than the amount found in most daily multivitamin supplements. The amount of iron prescribed by your doctor will be in milligrams (mg) of elemental iron. Most people with iron deficiency need 150-200 mg per day of elemental iron (2 to 5 mg of iron per kilogram of body weight per day). Ask your doctor how many milligrams of iron you should be taking per day. If you take vitamins, bring them to your doctor’s visit to be sure.

There is no evidence that any one type of iron salt, liquid, or pill is better than the others, and the amount of elemental iron varies with different preparations. To be sure of the amount of iron in a product, check the packaging. In addition to elemental iron, the iron salt content (ferrous sulfate, fumarate, or gluconate) may also be listed on the package, which can make it confusing for consumers to know how many tablets or how much liquid to take to get the proper dosage of iron.

Iron is absorbed in the small intestine (duodenum and first part of the jejunum). This means that enteric-coated iron tablets may not work as well. If you take antacids, you should take iron tablets two hours before or four hours after the antacid. Vitamin C (ascorbic acid) improves iron absorption, and some doctors recommend that you take 250 mg of vitamin C with iron tablets.

Want To Become A Coooking Pro? Read On