Homemade Banana Pudding is a classic for a reason! Homemade vanilla pudding layered with bananas, vanilla wafer cookies and whipped cream is the ultimate comfort food.

If there were ever a dessert – aside from cheesecake that I’d say I am obsessed with, it would be Banana Pudding.

Whether it is homemade, a super simple version with packaged ingredients, or even this easy Banana Cream Pie Fluff, I simply don’t think you can wrong with bananas, whipped cream and vanilla wafers. It’s pretty much my favorite flavor combo at the moment, so you’ll be seeing a few more banana cream recipes in the coming weeks.

Homemade Banana Pudding is so simple to make – even from scratch and it can feed a crowd if you double the recipe for a trifle dish, which is why it’s ranks as one of my top 5 potluck recipes. But it also keeps pretty well in the fridge, so if you’re not feeding a crowd, you can have this as a delicious dessert or snack throughout the week.

There’s just something about the layers of Nilla wafer cookies, sweet and creamy vanilla pudding, fresh bananas, and pillowy whipped cream. I could eat it all day long.

There are lots of ways to make an easy banana pudding with pudding mix or even Cool Whip. But sometimes I just want to make a Homemade Banana Pudding with Homemade Vanilla Pudding and Homemade Whipped Cream.

Ok, not quite. I don’t make my own Nilla wafers, although you totally could! Homemade vanilla wafers would be delicious – I just never feel like making them.

Don’t worry that making your own banana pudding from scratch is hard. It’s a lot easier than you think!

HOW TO MAKE BANANA PUDDING FROM SCRATCH

First, you’ll want to get the components of your Homemade Banana Pudding ready to go:

As soon as the pudding comes off the stove and you whisk in the butter and vanilla, grab your favorite baking dish. Line the bottom of the dish with a layer of Nilla wafer cookies, topped with a layer of sliced bananas.

Pour half of the warm pudding over the sliced bananas. Repeat the cookie, banana, and pudding layers one more time.

Place a layer of plastic wrap over the pudding so that the plastic touches the top of the pudding. This will prevent a skin from forming while it chills.

Let the pudding chill for at least 4 hours. Before serving, top with as much whipped cream as you desire. Garnish with more cookies and banana slices.

One batch of pudding will fill a 2 to 2 ½ quart baking dish. If you’d like to make your banana pudding in a trifle dish like you see in these photos, I recommend doubling the recipe to fill the dish.

This Homemade Banana Pudding recipe makes the creamiest and most flavorful banana pudding ever! Layered with bananas and sweet vanilla wafer cookies, this Southern dessert recipe is hands down the best banana pudding.

And there’s nothing better than a delicious homemade pudding. I feel like that’s how banana pudding is supposed to be. Southern, homemade, amazing.

But while I’ve tasted lots of great banana pudding in my day (and some not so great), I’ve never had a go-to recipe myself. So, I set out to make one.

When it comes to the pudding mix versions, they are often mixed with either sweetened condensed milk or cream cheese, or both. They also typically have some whipped cream stirred in there.

I tried it with various mixes of all of the above. The straight up homemade way, the pudding mix with sweetened condensed milk and a version that also included cream cheese.

If I’m being completely honest, we preferred the pudding mix over the straight up homemade pudding version. The plain homemade pudding just didn’t have the flavor we’ve come to know as that classic banana pudding (from the sweetened condense milk) and the texture wasn’t as creamy.

However, I know homemade is often much better than what you get from a box, so I tried again to make something even better. This time with a mix of the two camps. I made homemade pudding and then add the sweetened condensed milk and whipped cream to it, like you might do with the pudding mix.

What Makes this the Best Banana Pudding Recipe?

The result? PURE PERFECTION! Swapping out the pudding mix for homemade pudding gave it even more flavor! Seriously so perfect. This is seriously the best homemade banana pudding! You don’t have to worry about the box mix, but you get all the greatness of the sweetened condensed milk and whipped cream. It’s creamy, flavorful and amazing. It’s truly the southern-style banana pudding you dream of. I will never make another version.

Another thing I love about this recipe is that it tastes even better after sitting in the fridge! The pudding will firm up as it refrigerates overnight, and the banana flavor will intensify. This is definitely a dessert you’ll want to make ahead of time, which is a bonus. Amazing.

This recipe uses simple ingredients that you probably already have ready to go! Here’s what you’ll need:

How to Make Banana Pudding From Scratch

This banana pudding from scratch recipe was handed down from my grandmother. My whole family loves it and we all grew up on it! Hope you enjoy it! 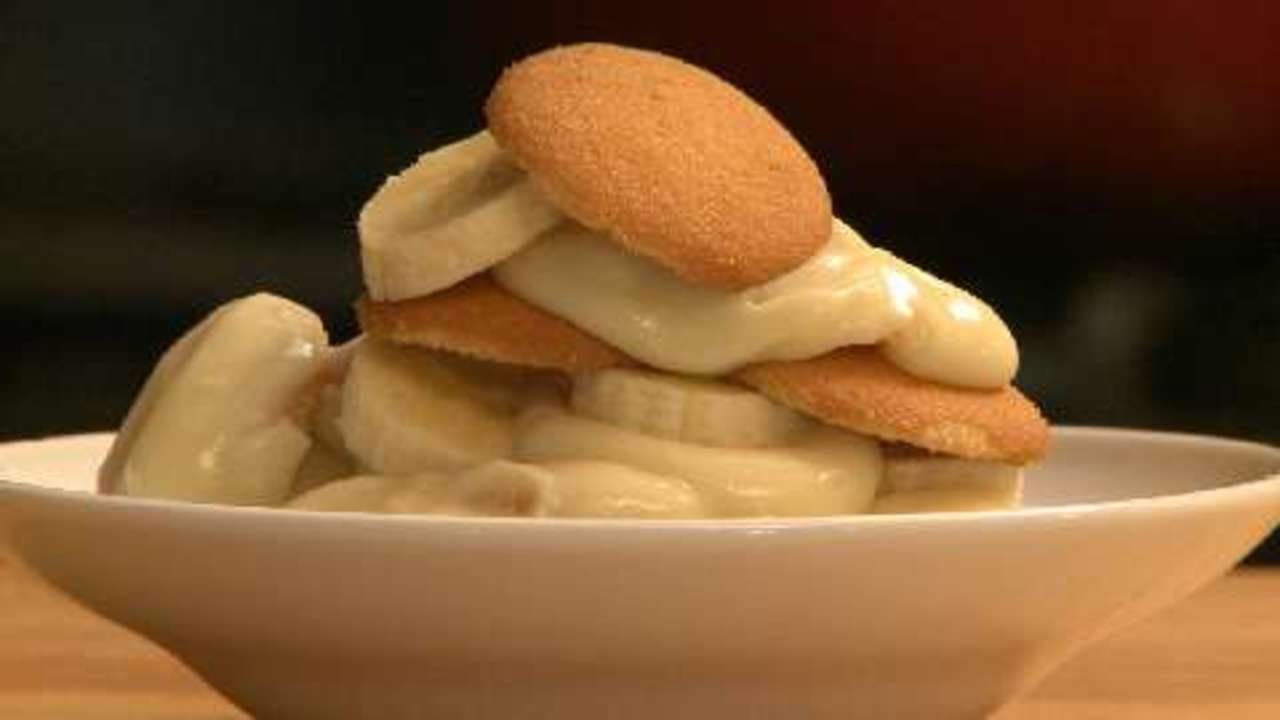 How To Make Banana Chips In Air Fryer

How To Make Strawberry Pound Cake