If you like apple crisp then you will love this Individual Apple Crisp In Muffin Tins! Each muffin cup holds a perfect individual serving. This recipe is very calories friendly. This is one of the best desserts and so good that the whole family will enjoy it. So be sure to make lots because they will all want more. This dessert would be a great addition to your Thanksgiving menu!

Our Classic Apple Crisp recipe tastes like fall! Just add a scoop of ice cream or some rich custard sauce and caramel for the best apple dessert ever. 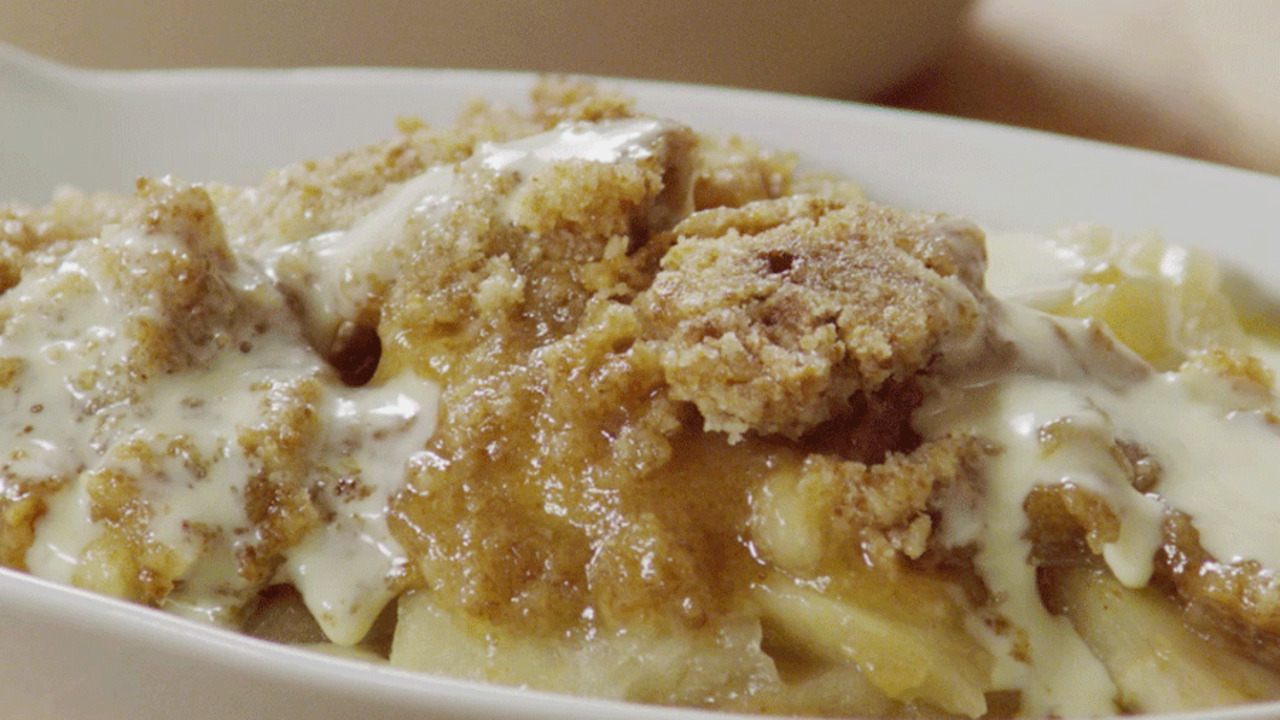 This classic apple dessert is served brown and bubbly from the oven. We’ve taken it to the next level with a rich and creamy custard sauce.

To grind your own cinnamon, place a 1-1/2-inch section of stick cinnamon in a spice mill or a coffee grinder set aside just for spices; grind to a fine powder.

Grate nutmeg with a nutmeg grater (find at kitchenware shops and some supermarkets).

These individual apple crisps have all the warm, cozy flavors you want in a fall dessert!

Juicy, vanilla-laced apples sweeten with maple syrup are topped with a thick layer of buttery, cinnamon-scented oat almond topping. Serve them warm with a big dollop of whipped cream or vanilla ice cream and perhaps a drizzle of salted caramel sauce.

It’s a great dessert to make when you are entertaining. Prepare it early in the day, refrigerate, and bake it while you are eating dinner. Bonus: it will make your kitchen smell amazing!

You know those moments when you’re craving something sweet, but the last thing you want is having lots of leftovers? That’s where small-batch desserts come in handy.

Single portion apple crisp is probably my favorite fall treat because it’s so simple to throw together, it takes little hands-on time, it makes enough for three servings, and you can really use any fruit you have on hand.

You probably have all the ingredients on hand. Here’s what you’ll need:

Feel free to experiment and have fun customizing this recipe. Here some suggestions:

HOW TO STORE, MAKE AHEAD, AND FREEZE

To store – Individual apple crisps will keep covered and refrigerated for up to 3 days. Gently rewarm in the oven or microwave. The crumble topping will continue to absorb moisture from the apples as it refrigerates, so it won’t stay crispy, but it is still delicious!

Make ahead – This is a great dessert to make when you are entertaining. You can assemble the apple crisps a few hours in advance and store it in the fridge until you’re ready to bake them.

To freeze – Cover tightly and freeze for up to three months. You can freeze apple crisp either before or after baking. Allow the crisp to thaw first in the fridge before reheating in the oven or microwave.

What kind of apples should I use for apple crisp?

Look for apples with a firm texture so they don’t turn to mush when baked.
For a sweeter crisp, use Braeburn, Golden Delicious, Jonagold, Fuji, Honeycrisp, or Pink Lady.
If you’d like a tarter crisp, use a tart apple like Granny Smith.

Shall I peel the apples?

It’s up to you! I find apple crisp has the best texture when it’s made with peeled apples.
If you choose to leave the skins on, be sure to wash the apples thoroughly.

What is the difference between apple crisp and apple crumble?

The ingredients are very similar, both desserts include baked fresh fruit. The main difference is in the topping: crisps has oats and crumbles doesn’t. However, these days the names are used interchangeably.

*Using oil will yield a crispier crust, while using non-hydrogenated buttery spread will yield a softer crust. Both will work fine for this recipe.

Preheat oven to 350 F. Grease a mini muffin tin. If desired, put a thin strip of parchment inside each tin (see photo). Set aside. Combine the first 6 ingredients, completely breaking up the butter until fine crumbles form. Press around 2 tsp dough firmly into the bottom of each tin. Stir together remaining ingredients in a bowl, and place a little over 1 tsp of this apple filling on top of each crust. Divide remaining crumbles—around 2 additional tsp per muffin tin—over the apples, pressing firmly down. Bake on the center rack, 14 minutes or until crust is golden and mostly set. Let cool at least 5 minutes before either pulling up the parchment strip or simply going around the sides of the pies with a knife.

How To Make Mango Milk