Calcium Chloride is Safe for Consumption

Calcium Chloride is used as a food additive to make foods taste saltier, keep color, and to keep some foods firm.  You will find it in things like pickles where it helps with all three things, providing a yummy salty flavor while keeping those pickles a healthy green color, and retaining firmness in your cucumbers.

You will also find calcium chloride in some bottled waters in order to add hardness for more of a spring water flavor than a purified water flavor.

Of course, everything has its limits, and while normal consumption is fine, you should expect problems with mega-doses of calcium chloride.  Just like you can have too much water, you can overdo the calcium chloride.

Calcium chloride also helps keep dust down on dirt roads and construction sites.  Dust can pollute the air and make breathing more difficult.  Calcium Chloride keeps the dust down and can be a real help in keeping the air clean in dry areas.

Calcium chloride is a common substance used to preserve our food, melt ice on the road and even dry concrete. While calcium chloride can be harmful if handled improperly, it is a generally safe substance. No need to worry about the trace amounts in the food you eat. Just be sure to wear gloves when tossing it on your driveway and you should have no issues.

What Is Calcium Chloride Used For?

As far as food goes, calcium chloride is regarded as a safe preservative, commonly used as an anti-browning agent for fruits and vegetables, according to the FDA. The post-harvest application of calcium chloride keeps produce fresh by reducing the vegetables’ weight loss, chilling injury, and loss of vitamin C and beta carotene, according to a 2016 article published in the Journal of Food Research. Calcium chloride is also used in products as a firming agent for foods like evaporated milk and cheese.

This substance is most commonly used to de-ice roads and highways in the form of road salt, according to the American Chemistry Council. Just like sodium chloride (table salt), calcium chloride lowers the melting temperature of ice and keeps our roads slip-free.

Calcium chloride is also often used as a concrete accelerator, according to the American Society of Concrete Contractors. The substance makes for an inexpensive and efficient way to speed up the rate at which concrete dries. However, there are certain restrictions in place that dictate the amount of calcium chloride permitted in concrete.

How to Handle Calcium Chloride Safely

Calcium chloride can be safe to use if handled properly. According to West Liberty University, be sure to wear protective clothing that covers the skin, especially the skin that comes in direct contact with the substance. If you’re working with calcium chloride for long periods of time, make sure you are in a well-ventilated area or take frequent breaks for fresh air.

When storing calcium chloride, keep it dry, concealed and away from zinc (since the two substances can react if mixed). If calcium chloride happens to spill, the IPCS recommends safely sweeping it into covered containers, moistening the salt if needed to more easily stow it.

What Is Calcium Chloride Used for in Food? 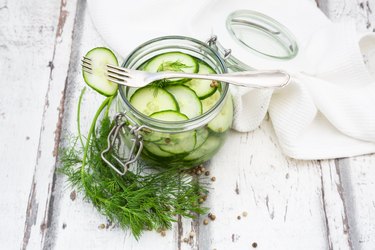 Calcium chloride in food is a firming agent, typically used to keep pickles crunchy and in canned fruits and veggies.

Calcium chloride in food is used as a firming agent, typically to help keep pickles and other canned fruits and vegetables crisp and crunchy. It’s generally recognized as safe by the FDA, but use food-grade calcium chloride for anything you plan to eat — and follow the instructions as written.

Calcium chloride in food is a firming agent, typically used to keep pickles crunchy and in canned fruits and veggies.

Calcium chloride is also used in some de-icing solutions to melt snow on roads, as an additive in some plastics and for drying concrete more quickly. The substance is found in a variety of household cleaners, detergents and cosmetics.

What is Calcium Chloride?

The Food and Drug Administration lists calcium chloride as GRAS — generally recognized as safe. According to the Joint FAO/WHO Expert Committee on Food Additives, calcium chloride in food is a firming agent and can also be used to prevent browning. Firming agents are food additives used to help processed fruits and vegetables stay crisp, for example in jars of pickles.

You can purchase calcium chloride to use during home pickling. For example, Ball Pickle Crisp Granules are available in 5.5-ounce containers. According to the manufacturer, one container can be used to make 80 quarts of pickles, and using calcium chloride means you no longer need to pre-soak your pickles in pickling lime for a number of hours.

A study published in the journal Food Control in January 2015 found that a combination of calcium chloride and chitosan can help extend the shelf life of fresh-cut honeydew melon. Researchers concluded that melons treated with the combination lost less mass over time, had better color retention and remained firmer. 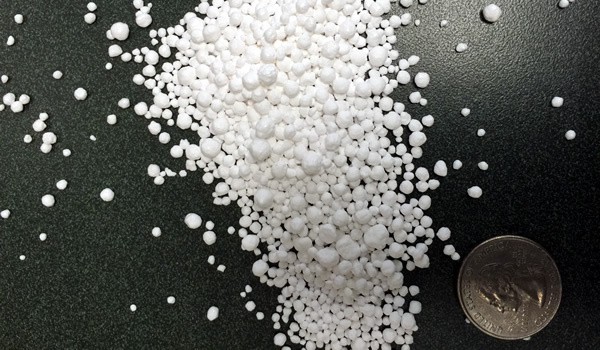 The substance has numerous applications outside the food world. According to the U.S. Department of Health and Human Services, calcium chloride is found in a number of household products, including:

The National Institutes of Health explains that calcium is necessary for muscle movements and communication between the brain and other parts of the body. It also helps release crucial hormones and enzymes. Calcium is generally stored in teeth and bones and helps keep those structures strong.

Your recommended daily calcium intake depends on your age and sex;

Most people get their daily calcium from foods rich in the mineral, like milk, yogurt, cheese, kale, broccoli and grains. If your calcium levels are low, your doctor may recommend a dietary supplement like calcium carbonate or calcium citrate.

For a study published in the Journal of Neonatal-Perinatal Medicine in 2017, researchers reviewed 15 years of data on calcium chloride use in neonatal intensive care units. They compared the outcomes of very low birth-weight babies given intravenous calcium chloride as part of their IV nutrition solutions to very low birth-weight babies given calcium gluconate in glass vials.

Beth Israel Lahey Health explains that exposure to aluminum is typically not harmful, but exposure to high levels of it can contribute to health issues including muscle weakness, bone deformities, slow growth in babies and children, seizures, lung problems, anemia and nervous system complications.

Learn About Vitamins And Supplements

How Much Iron A Day Do I Need