A keto apple crisp with a cooked flour and nut topping and lots of fresh apples. The best part about this dish is that you don’t need any fancy ingredients. It’s just apples, cinnamon, some sweetener of your choice and crunchy nuts. The topping tastes like streusel without the butter and it has almond flour. You can feel free to use another type of nuts like pecans or macadamias. 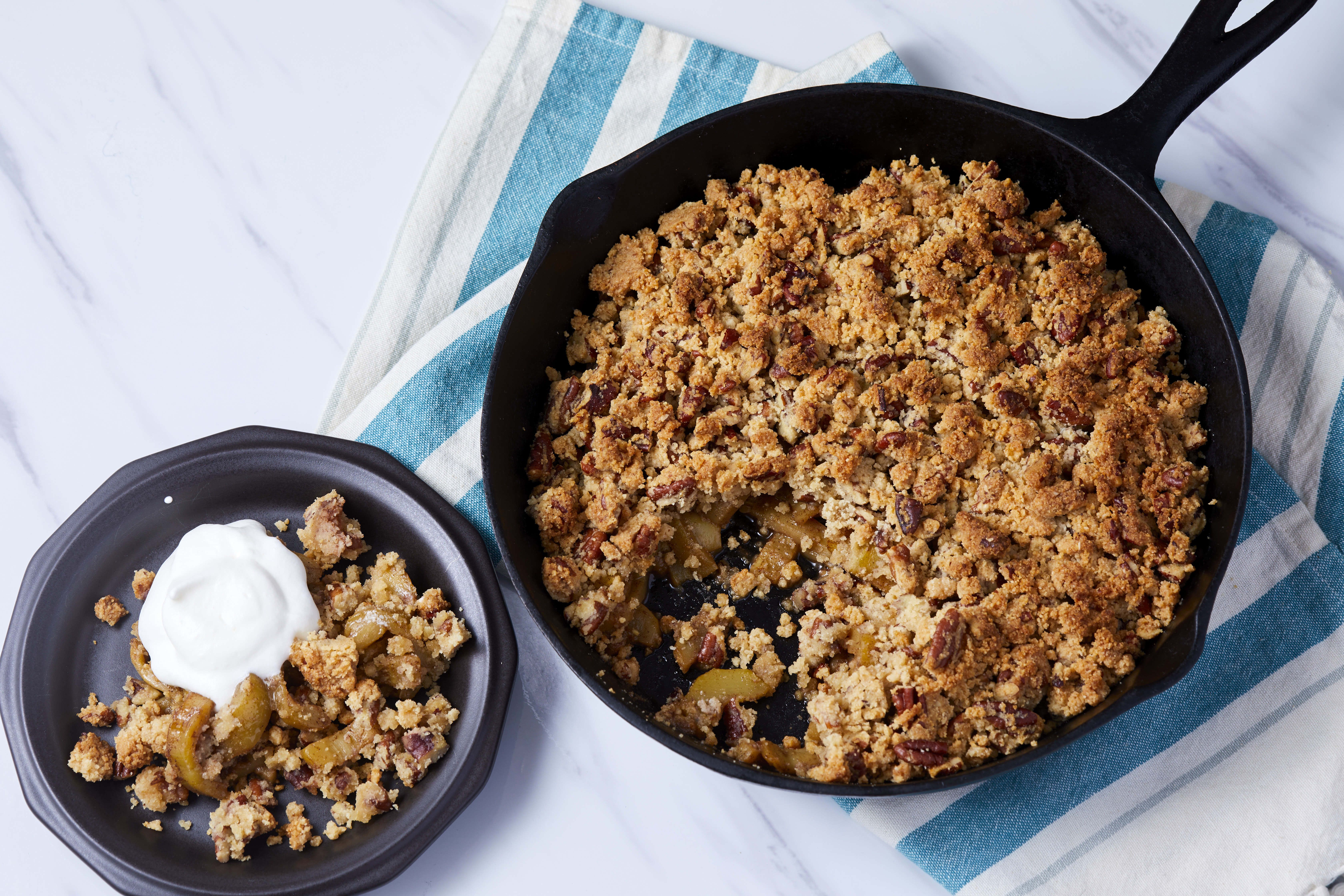 Sadly, apples are fairly high in carbs. What’s not: zucchini. We know, we know. Replacing a Granny Smith with a summer squash doesn’t feel like a fair swap. But trust us—it works.

Want to splurge for actual apples? Sub in 3 apples for the zucchini, reduce the brown Swerve to 1⁄4 cup, and increase the baking time to 45 minutes.

butter, melted and cooled slightly, plus more for brushing

This is an easy, amazing and delicious recipe for Low Carb “Apple Crisp” not using apples…That’s right. You make this with zucchini squash or yellow squash or a combination of both. When you add “apple pie spices” and lemon juice you can’t tell the difference.

Believe it or not, this easy, delicious Keto Apple Crisp is not made from apples. instead, it’s made from yellow or green squash or a combination of both. They both work just as good.

When we decided that we had to make a Low Carb version of Apple Crisp I was excited. I love apples. I thought low carb meant to just take out the white sugar and the white flour, and you’re all set. I was wrong. It was also important to take out the apples if you want to cut the carb count even more.

At first I was really disappointed and really negative about using squash instead of apples. But I knew we had to give it a try because people are looking for low carb options and this was what it had to be.

The Best Substitute for Apples

So the best substitute for apples is yellow or green squash, and the best ones to use are the small squash if possible. The reason why is that the smaller the seeds, the firmer the flesh and as a result the more it will resemble apples.

You can still use larger squash but you may have to cut out the seeds so that your apple crisp is not full of big squash seeds. We have made this apple crisp so many times now and so far, no one has figured out it isn’t apples.

What makes this “Apple Crisp” so Healthy?

Zucchini and yellow squash are 2 vegetables that are packed with so many vitamins and are both low in carbs, 2.7 carbs per cup of cooked squash. The squash is loaded with B vitamins, vitamin C, Zinc, Potassium, and fiber, all of which make squash a good healthy choice.

Real Apples also have a lot of vitamins and fiber too, which make them healthy too, as we have always heard that “An apple a day keeps the doctor away,” but the only thing is they are higher in carbs (14 carbs per cup) than squash.

So if you are on Keto or a strict low carb diet, you may not have enough carbs in a day to include apples. You will have to be the judge of that.

Is Apple crisp the same as apple crumble or cobbler? Crisp and Crumble both originate from England and are so similar, that they have become interchangeable. Here’s a quick breakdown of the 3 desserts.

Crisps and crumbles both contain fresh fruit with a streusel-like topping that gets baked until the fruit is cooked. The main difference between the 2 is the topping.

In a true apple or blueberry crisp, the crisp topping is usually made with butter, sugar, oats. Whereas a crumble topping will typically be made from butter, sugar, flour. Both though can have nuts and spices added to either of them as a nice addition.

A fruit cobbler has a thick biscuit topping. It gets its name because the dollops of biscuit dough or batter are dropped on top of the fruit mixture, and they puff up looking like cobbled roads.

What Ingredients are in Keto Apple Crisp?

Yellow or Green Squash – I prefer using small green zucchini’s. I know it sounds odd, but zucchini can have the same taste of apples by adding some lemon juice, the right spices, and some low carb sweetener. This way you get the taste you love without adding all the carbs.

Lemon Juice – I find this to be absolutely a key ingredient to making this mock apple crisp. Apples, unlike zucchini, are rather acidic so adding some fresh lemon juice gives you the added acidity that you need, from leaving out the apples.

Butter – I don’t just melt the butter, but I find that browning it first gives it a really nice flavor.

Golden Monk Fruit – This is a new low carb sweetener I started using for this recipe. It’s a raw cane sugar replacement. Used for the filling, it’s mixed with the browned butter. But I also used it for the crisp topping as well.

Xanthan Gum – This is used to help thicken up the filling. The general rule of thumb with xanthan gum is less is more. You only need a small amount to thicken the filling.

Pecans – This is for the topping since I don’t add oats like what you would find in a typical crisp topping.  The chopped nuts help to add some bulk to the flour and they crisp up as the oats would.

Almond Flour – So typically you would add flour to a crumble topping, but I decided to add it to my crisp topping. It’s a good binder and adds some volume to the crisp.

What do I Use for the Apple Crisp Topping?

Butter is an essential ingredient for any crisp topping, whether it’s a low carb or not. It’s the foundation ingredient in which you build on after that but make sure that your butter is softened. It makes it much easier to work with.

Of course, 2 other ingredients that are in most crisp toppings are flour to give it some volume and sugar for the sweetness.

So if it’s going to be low carb, then we replaced the flour with almond flour and the sugar with monk fruit which is a great sugar replacement that converts 1 to 1 as far as sweetness so there’s no guessing game as to the quantity to put into your apple crisp topping.

Unlike regular sugar, monk fruit in most cases does not raise your glycemic index.

The pecans replace the oats and add so much flavor and crunch and are lower in carbs. Oats have about 46 net carbs in 1 cup whereas Pecans have 4 net carbs per cup. Quite a large difference right?!

How Many Carbs are in Keto Apple Crisp?

In our Apple Crisp, there are 3.6 NET CARBS in ½ cup serving which is fantastic. When you want a dessert you can make up a batch of Low Carb Apple Crisp which only takes a few minutes to prepare and in a short time, you can be eating this delicious dessert.

So apples are avoided while on a keto and low carb diet because even just 1 cup of sliced apples can have 12 net carbs. So eating too much of it can certainly knock you out of ketosis.

However, if you are still wanting to use apples then what I did for you is I figured out the nutrition facts when using real apples.

Instead of using 4 cups of zucchini, replace it with 4 cups of apples. Keep all the other ingredients the same. For ½ cup, it’s 10 net carbs per serving.

If that’s still too high, then what you can do is cut your portion down to a ¼ cup and now it will only be 5 net carbs. That might be a little more doable for you.

What are some other variations you can make with this a low carb apple crisp? Especially if you’re using real apples, you can also add some other fruit to it.

Blackberries, blueberries, or really any type of berry would work really nicely together. If there are any other fruits that are your favorites, then those could be added as well.

How to Make the Filling Thicker?

Xanthan gum is going to be your go-to ingredient for so many recipes, including this mock apple crisp.

All you need is about ½ tsp added while you’re cooking the squash, let it simmer and it thickens up in no time. The rule of xanthan gum is: Less is More.

Other Diets this Recipe is Good for

This easy low carb apple crisp is also gluten-free. The best part is the topping doesn’t contain any gluten. You can buy gluten-free oats, but not everyone would have that in their cabinet or you might not be able to find it at your grocery store.

So replacing the oats with the pecans makes it an easy way to keep it gluten-free and still give you a nice crunch on top.

What to Serve with Apple Crisp

What’s the first thing that comes to mind when you think of eating apple crisp?? Adding a scoop of vanilla ice cream on top! Yup, that’s what comes to my mind first too. But what’s even better is adding some Keto Ice Cream or even some keto whipped cream.

See eating low carb, doesn’t have to be as bad as what most people think and you don’t have to give up some of your favorite dishes.

Should Apple Crisp be Refrigerated?

Many people wonder how to store apple crisp after baking it, either this keto version or a normal apple crisp.

For both Keto crisp and regular apple crisp, you can leave it on the counter the day you cook it, but then it needs to be refrigerated after that. Let it completely cool off while sitting on the counter, then wrap it in plastic wrap and put it in the fridge.

You can also keep it in an airtight container in the fridge as well. It should last for about 3-4 days.

Can I Freeze Sugar-Free Apple Crisp?

You can freeze the low carb apple crisp if you need to, but what we found to be better is freezing it before cooking it.

Do all your prep work and assemble the apple crisp. Then cover it with plastic wrap and then foil. Place in the freezer until you’re ready to cook it.

To cook the apple crisp, then thaw out on the counter, and then bake for 30 minutes at 350 degrees.

If you want to heat the whole baking dish, then stick it back into the oven to reheat it. Put it on low, around 200 degrees so the topping doesn’t burn.