This Slow Cooker Shredded Beef makes the juiciest fall-apart-tender pulled beef. We use this versatile recipe to make dozens of different meals, including shredded beef sandwiches, tacos, pasta, and more!

This post is sponsored by Ohio Beef. As always, all opinions are my own.

Shredded beef is my back to school BFF. When I’ve got a busy week ahead, I know this recipe has my back. It’s meal prepping MAGIC that makes a whole week of meals a breeze.

My favorite part about this pulled beef is just how easy it is! It takes less than 10 minutes to prep and only requires a few seasonings, onions, garlic, olive oil, and red wine vinegar. I don’t add any broth to the slow cooker, so the meat cooks in its own delicious juices. The resulting pulled beef is rich, savory, and accented by caramelized onions and garlic. In other words, it’s AMAZING.

WHAT TO MAKE WITH SHREDDED BEEF

Ok wait, I changed my mind. My actual favorite part about shredded beef is alllll the delicious things you can make with it.

Today, I’m thrilled to be starting a a series of big batch recipes, where we meal prep one recipe, then repurpose it into new recipes throughout the week. Cook once, eat 3 (or 4!) times.

This Slow Cooker Shredded Beef makes enough for at least three dinners, and it’s the perfect protein-packed anchor for so many different meals.

The first night we make it, we keep it simple and serve the pulled beef over homemade egg noodles (store bought noodles are also 100% on the level) or creamy mashed potatoes.

You can even get crazy and do noodles AND mashed potatoes in a beef-inspired version of this Amish Chicken and Noodles. The juices from the crock pot meld into the noodles and mashed potatoes and make the most amazing silky, savory sauce. I’m getting excited just talking about it, you guys. It is so darn good. 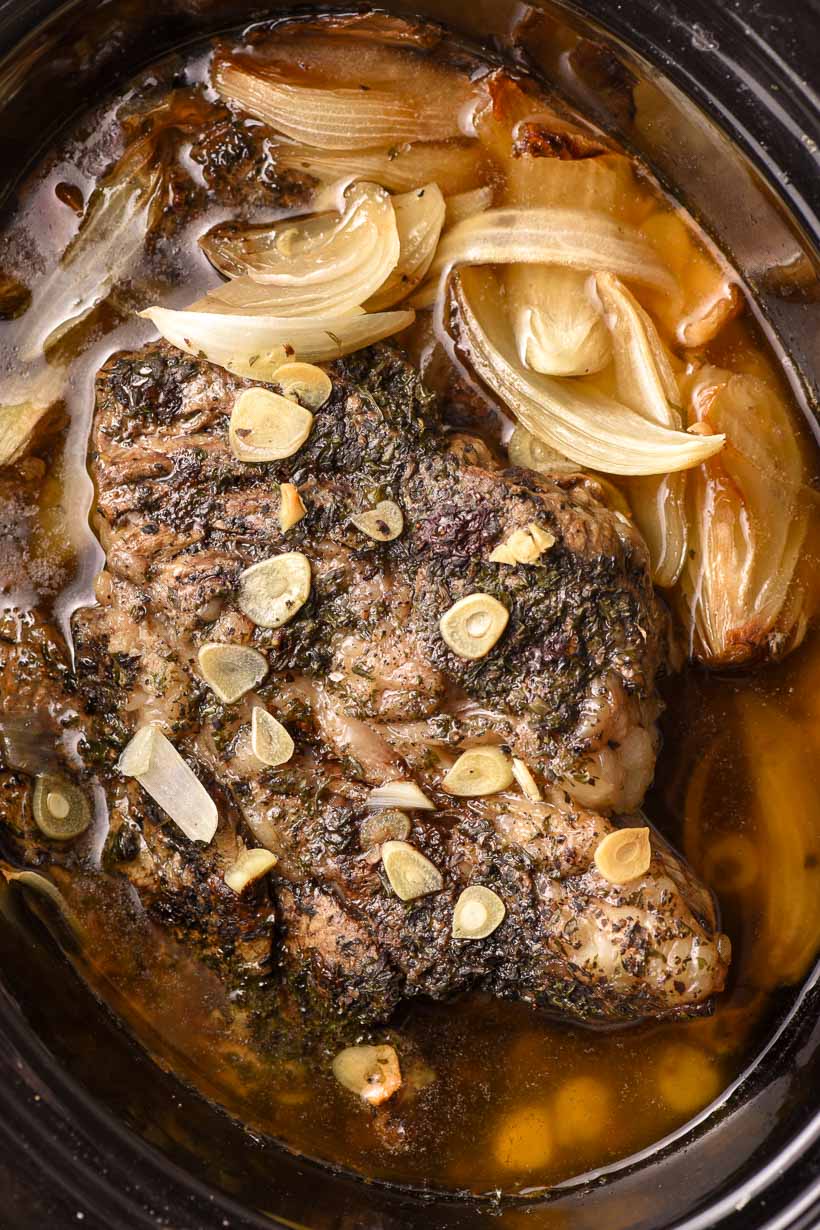 HOW TO MAKE PULLED BEEF IN THE CROCK POT

Now that you’re dreaming of all the delicious beefy recipes that await you, let’s break down how to make this easy shredded beef!

When I make roasts, I usually recommend browning the meat in a skillet before adding it to the crock pot. However, with shredded beef, this extra step really isn’t necessary. That makes this a truly dump-and-go recipe. HOORAY!

To make the pulled beef: 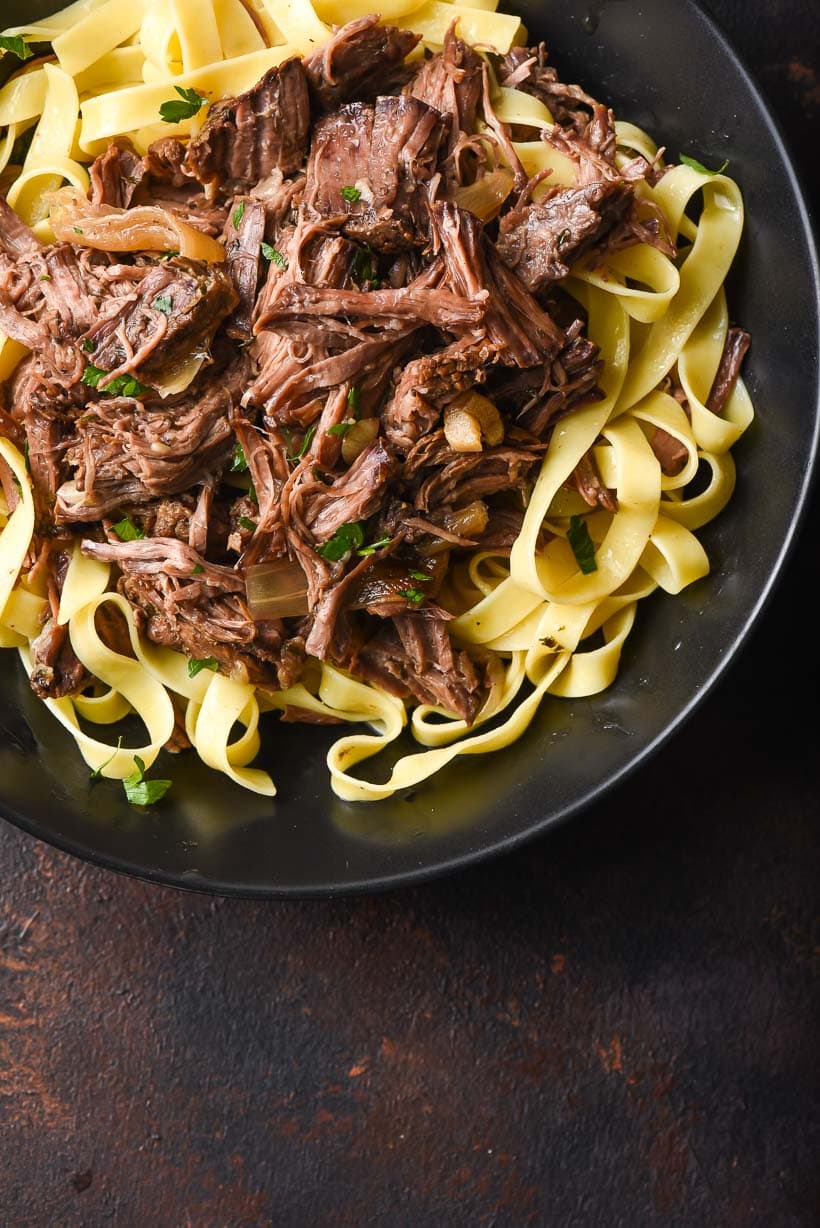 HOW DO I KNOW WHEN ROAST IS DONE?

If you test the roast after 8 hours and it doesn’t easily pull apart, it needs a little longer to cook. It’s a common misconception that a tougher roast is overcooked. In most cases, the opposite is actually true! Give the roast an extra hour or two, and it should shred easily with a little help from two meat forks.

WHAT IS A GOOD CUT OF BEEF FOR SHREDDING?

It may sound counterintuitive, but the best cuts of meat for tender, juicy shredded beef are actually the toughest cuts. Tough cuts like chuck roast stand up well to slow cooking, and become succulent and pull-apart-tender after hours in the crock pot.

My favorite cut is a chuck roast, which may also be labeled as a shoulder roast, chuck eye roast, or arm chuck roast. Look for a roast that has good marbling (or white fat) running through it.

Brisket is another great choice for shredded beef. In fact, I use brisket to create these amazing Slow Cooker Shredded Beef Brisket French Dip Sandwiches.

Because I like to have enough beef for several meals, I always use at least 4 lbs. of boneless meat. You likely won’t find a single roast this big at the grocery store, so I usually just pick up two 2-3 lb roasts at a time. Look out for deals to save money! Our local grocery store often runs Buy One-Get One sales on roasts

Shredded beef sandwiches are an easy slow cooker recipe made with chuck roast, peppers, and onions that cook together until the beef is falling apart tender. Shred it, pile it on hoagie rolls, and top it with peppers and cheese for an easy weeknight dinner.

So it is at this time of year – also known as post-holiday slump – that simple and easy dinners are not just a nice-to-have but a necessity. I mean, I don’t know about you, but it’s real easy to let time slip by in a blur of restaurant meals and take-out bags.

So let’s eat well. It will power us through cold days riddled with endless to-dos and help take the edge off that holiday hangover that, for at least me, persists all through January.

So today, we have ridiculously easy, totally satisfying slow cooker shredded beef sandwiches – a quick prep, no pre-cooking anything, dump and go dinner hero that you can serve on buns or pile on rice, mashed potatoes, or pasta.

HOW TO MAKE SHREDDED BEEF

Place the diced bell pepper and onion in the slow cooker. Pour the broth over the top.

Mix the seasonings together in a small bowl and then rub it on the beef, covering all sides. Place the beef in the slow cooker. Cook the beef on low for 9-10 hours.

Shred the beef in the slow cooker using two forks. Add the Worcestershire sauce and check the seasoning and add more salt if you think it needs it.

HOW TO MAKE THE SANDWICHES

My favorite way to serve shredded beef is in sandwiches. Here’s what you’ll need:

Pile the shredded meat on the hoagie. Top it with the peppers and a slice of provolone cheese. Place the sandwiches open-faced on a sheet pan and stick them under the broiler. Broil them for a few minutes until the cheese melts. Add the top roll and serve!

MORE WAYS TO SERVE IT

Not into sandwiches? That is not a problem, I’ve got more ideas for you:

Easy slow cooker shredded beef sandwiches topped with sliced peppers, onions, and provolone cheese. Use it to make sandwiches or serve the shredded beef over mashed potatoes, noodles, or rice.

Slow Cooker Shredded Beef is perfect to add to so many delicious dishes and recipes. Make this simple beef recipe to keep on hand for so many easy dinner recipes.

Making Slow Cooker Shredded Beef to have on hand for recipes throughout the week has to be one of my favorite things ever. Well, that and making slow cooker chicken for the same purpose. But, having shredded beef stocked in the refrigerator just makes life easier.

And thankfully, it doesn’t take much thought, time, or energy on my part.

Some days, I have none to spare!

Don’t get me wrong, I absolutely love cooking. It is like free therapy for me. No need to pay to go sprawl out on someone’s sofa to tell them about my day when I can just head to my kitchen and get reenergized while baking a cake or making pie crust, making homemade bread, or even something as simple as making breakfast or supper for my family.

But some days, especially when our homeschooling day seems to linger from sun-up to sun-down, we’re running from one activity or appointment to another, and I haven’t even attempted to think about what to make for supper, having made shredded beef in the slow cooker is like the most brilliant thing I’ve ever done. It makes me feel like a genius or something.

So, pull that slow cooker out of the cabinet and get ready to make some delicious shredded beef. I’ve got some absolute delicious dishes that you’ll definitely want to have this beef ready and waiting to go into like shredded beef nachos, brunswick stew, enchilada casserole.

Slow Cooker Shredded Beef is perfect to add to so many delicious dishes and recipes. Make this slow cooker shredded beef and keep on hand for easy dinner recipes.

Food With Calcium And Vitamin D

Cooking Ideas To Help You Out In The Kitchen