Calcium bioavailability varies greatly from food to food, as shown in the table below. This table gives the serving size, calcium content of that food, and percent absorbed. The calcium content is multiplied by the absorption percentage to calculate the estimated calcium absorbed. Finally, it shows the servings of each food needed to equal the estimated calcium absorbed from 1 serving of milk.

Notice that the foods high in oxalate like spinach, rhubarb, sweet potatoes, and dried beans are poorly absorbed. But there are still a number of calcium sources outside of milk.

The 2 most common forms of calcium found in supplements are calcium carbonate and calcium citrate. As you can see in the figure below, they differ in the amount of elemental calcium they contain. This shows how much of the molecular weight of the compound is calcium. 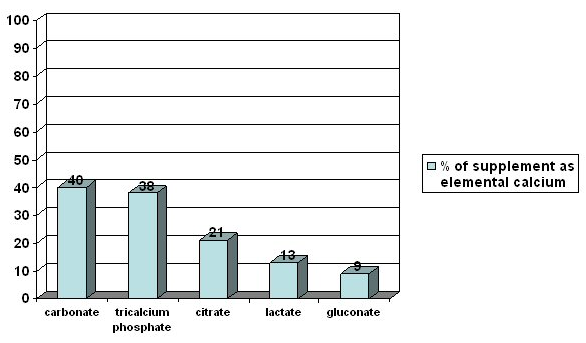 Figure 12.221 Percent of calcium supplements that is elemental calcium

The higher the percent elemental calcium, the greater the amount of calcium you will receive per given weight of that compound, versus a compound that has a lower elemental calcium percentage. Both carbonate and citrate forms are well absorbed, but individuals with low stomach acid absorb citrate better. Also, carbonate is best absorbed when taken with food, while for citrate it is equally well absorbed when taken alone.

Older research suggested that calcium citrate malate was more bioavailable than other calcium sources. However, a more recent clinical study found no difference in the bioavailability of calcium from calcium citrate malate in orange juice, skim milk, or calcium carbonate supplements. There is some evidence that suggests that even though bioavailability is the same among these different forms, they might not be equally effective in improving bone measures.

Calcium is a mineral most often associated with healthy bones and teeth, although it also plays an important role in blood clotting, helping muscles to contract, and regulating normal heart rhythms and nerve functions. About 99% of the body’s calcium is stored in bones, and the remaining 1% is found in blood, muscle, and other tissues.

In order to perform these vital daily functions, the body works to keep a steady amount of calcium in the blood and tissues. If calcium levels drop too low in the blood, parathyroid hormone (PTH) will signal the bones to release calcium into the bloodstream. This hormone may also activate vitamin D to improve the absorption of calcium in the intestines. At the same time, PTH signals the kidneys to release less calcium in the urine. When the body has enough calcium, a different hormone called calcitonin works to do the opposite: it lowers calcium levels in the blood by stopping the release of calcium from bones and signaling the kidneys to rid more of it in the urine.

The body gets the calcium it needs in two ways. One is by eating foods or supplements that contain calcium, and the other is by drawing from calcium in the body. If one does not eat enough calcium-containing foods, the body will remove calcium from bones. Ideally, the calcium that is “borrowed” from the bones will be replaced at a later point. But this doesn’t always happen, and can’t always be accomplished just by eating more calcium.

Calcium is a large mineral and not so easy to break down in the gut. The amount of calcium listed on the Nutrition Facts label of a food product is the measure of calcium in the food, but not necessarily the amount the body will absorb. The amount that is actually absorbed and used by the body is called “calcium bioavailablity.” Some foods have higher calcium bioavailability than others.For example, dairy foods have a bioavailablity of about 30% absorption so if a food label on milk lists 300 mg of calcium per cup, about 100 mg will be absorbed and used by the body. Plant foods like leafy greens contain less calcium overall but have a higher bioavailability than dairy. For example, bok choy contains about 160 mg of calcium per 1 cup cooked but has a higher bioavailability of 50%, so about 80 mg is absorbed. Therefore, eating 1 cup of cooked bok choy has almost as much bioavailable calcium as 1 cup of milk. Calcium-fortified orange juice and calcium-set tofu have a similar total amount of calcium and bioavailability as milk, while almonds have slightly lower total calcium and bioavailability of about 20%. This may be useful information for those who cannot eat dairy foods or who follow a vegan diet.

A downside to some plant foods is that they contain naturally occurring plant substances, sometimes referred to as “anti-nutrients.” Examples of anti-nutrients are oxalates and phytates that bind to calcium and decrease its bioavailablity. Spinach contains the most calcium of all the leafy greens at 260 mg of calcium per 1 cup cooked, but it is also high in oxalates, lowering the bioavailability so that only 5% or about 13 mg of calcium can be used by the body. The takeaway message is not to avoid spinach, which contains other valuable nutrients, but not to rely on spinach as a significant source of calcium since most of it will not be absorbed by the body. You can also schedule your meals so that you do not eat “calcium-binding” foods like spinach at the same meal as calcium-rich foods or with calcium supplements.

If you are scanning food labels to reach a specific amount of daily calcium, continue to aim for the RDAs set for your age group and gender. The RDAs are established with an understanding of calcium bioavailability in food. Also keep in mind that the exact amount of calcium absorbed in the body will vary among individuals based on their metabolism and what other foods are eaten at the same meal. In general, eating a variety of calcium-rich foods can help to offset any small losses.

Signs of Deficiency and Toxicity

Blood levels of calcium are tightly regulated. Bones will release calcium into the blood if the diet does not provide enough, and no symptoms usually occur. A more serious deficiency of calcium, called hypocalcemia, results from diseases such as kidney failure, surgeries of the digestive tract like gastric bypass, or medications like diuretics that interfere with absorption.

A gradual, progressive calcium deficiency can occur in people who do not get enough dietary calcium in the long-term or who lose the ability to absorb calcium. The first early stage of bone loss is called osteopenia and, if untreated, osteoporosis follows. Examples of people at risk include:

Too much calcium in the blood is called hypercalcemia. The Upper Limit (UL) for calcium is 2,500 mg daily from food and supplements. People over the age of 50 should not take more than 2,000 mg daily, especially from supplements, as this can increase risk of some conditions like kidney stones, prostate cancer, and constipation. Some research has shown that in certain people, calcium can accumulate in blood vessels with long-term high doses and cause heart problems. Calcium is also a large mineral that can block the absorption of other minerals like iron and zinc.

Calcium is widely available* in many foods, not just milk and other dairy foods. Fruits, leafy greens, beans, nuts, and some starchy vegetables are good sources.

Certain nutrients and medications may increase your need for calcium because they either lower the absorption of calcium in the gut or cause more calcium to be excreted in the urine. These include: corticosteroids (example: prednisone), excess sodium in the diet, phosphoric acid such as found in dark cola sodas, excess alcohol, and oxalates

How To Make Strawberry Rhubarb Crisp